This will be Kovalev’s third defence of the title, which he ripped from the head of Nathan Cleverly, in four rounds last July. Sergey Kovalev had entered that match a bit of a mystery man to the general boxing public, but already rumoured to be a puncher of serious note. What transpired that night served to show why Kovalev has been given the nickname of ‘The Krusher.’ The Russian’s performances since winning the title have marked him out as one of the most destructive punchers in the world, pound-for-pound, alongside fellow Eastern European wrecking machine Gennady Golovkin.

‘The Krusher’ shares a number of parallels with the WBA wo 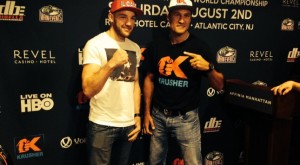 rld middleweight champion Golovkin. As with Golovkin, although he is primarily known for his powerful punching, Kovalev is also well schooled in the finer points of boxing. Kovalev sets his opponents up with a good jab and is an excellent body puncher. His punches, like Golovkin’s, are also short and swiftly delivered, with pinpoint accuracy. ‘The Krusher’ makes every punch count, and despite the brevity of the majority of his fights, performs his destructive work with impressive patience.

This strong foundation of technique makes Kovalev a much more formidable all- round fighter. He is not the stereotypical knockout artist who can simply be out-boxed by a fighter with a bit of speed and ring technique.

While Gennady Golovkin is seen as one of the most explosive punchers pound-for- pound in the world, Kovalev’s own punching prowess seems to be, if anything, even more explosive, to a point where it may well be in a class of its own. In his 24 victories, Kovalev has only had to go past the 3rd round five times.

Another thing which Kovalev shares with Golovkin since winning his world title, is a difficulty enticing the other big names of his division, especially the division’s other ’world champions’ to enter the ring with him. At one point, a showdown with Adonis Stevenson (who holds the WBC and lineal titles) in what would have been a big unification fight, seemed to have been agreed by all parties, only for Stevenson to then turn around and move to rival network Showtime. As well as generating a lawsuit, which is still in its early stages, this move by Stevenson has denied Kovalev of what would have been a defining fight. The other big name at 175 pounds is the remarkable Bernard Hopkins, who at the tender age of 49 years old, holds the WBA and IBF titles. Unfortunately for ’The Krusher,’ Hopkins has recently seemed far more interested in facing Stevenson in the ring, although some recent comments from ’The Alien’ may be cause for hope. Hopkin’s has said that he may be open to tackling Kovalev before he facing Stevenson. Then again, this statement could be an example of Hopkins’ mind games and a method of coaxing Stevenson to come to a decision in their negotiations.

With the other ‘world champions’ avoiding him, Kovalev has had to take the challenges from the fighters that are willing to face him. Consequently, Kovalev has had the quality of his opposition questioned (another dilemma of Gennady Golovkin.) While Kovalev’s challengers so far may not include the names of elite level fighters, it’s worth noting that out of his past five opponents, three of them, (including Caparello) have been undefeated, and that the five fighters combined records come to (113-2-1, 78koes.)

The Australian challenger comes into Saturday’s contest unbeaten in 20 fights, with the only ’blot’ on his record being a 10 round draw in his 6th fight. The challenger is a cagey southpaw, who stands six feet one and a half inches, and is a rangy boxer, who fights mostly off the back foot, and likes to counterpunch his opponents. Caparello’s most notable wins have come in his last two fights, with point’s decisions over Elvir Muriqi and Allan Green. While long time solid contenders at 175, both fighters are notably past their peaks, at this point in their careers.

One of Caparello’s biggest problems in facing ’The Krusher’, is that it is a huge leap up in competition for the Australian, and he is unlikely to appreciate just how high a leap it is until he actually feels the first punch land from Kovalev.

Another problem that the challenger has is that he is only a moderate puncher himself, with just 6 stoppage wins in his career so far.

Without a discernable punch to trouble Kovalev, the 27 -year old challenger’s only chance of victory in this fight is to employ his boxing skills, make himself an elusive target, and attempt to outbox the champion. Although Caparello is a good all-round boxer, he is not exceptional in any area. He looks slower and less mobile than Ismayl Sillah, whom Kovalev made his first defence against last November, and dispatched in 2 rounds, and he does not have the solid defence of the champion’s last challenger Cedic Agnew, who managed to take Kovalev into the 7th round in April.

The biggest thing that Caparello has in his favour is that no one is giving him a chance, and that can sometimes prove dangerous for a defending champion.

However, ‘The Krusher’ has shown himself, up until now, to be an extremely focused and single-minded individual. He would seem unlikely to lose that hunger and intensity now, at the point of his career where he is poised to break into the elite level.

All-in-all, this looks like a straightforward ’keep busy’ defence for ’The Krusher’ with the main question being how long can the challenger survive.

Kovalev will study his challenger early on, which will probably see him having to hunt down the Australian from behind his jab, and soften him up with his body attack. The challenger’s apparent toughness and boxing style should see him through the early rounds, but by the 5th or 6th round Kovalev’s attacks would have taken their toll and Caparello will be slowed down enough for ’The Krusher’ to deliver the finisher.

With a possible high profile unification fight with Bernard Hopkins waiting in the near future for him, it is important for Kovalev to look impressive in this defence, and deliver what is becoming one his trademark spectacular knockouts. The chances are that this is exactly what ’The Krusher’ will do, as he shows once more why he is fast becoming the most feared puncher, pound-for-pound, in boxing today.