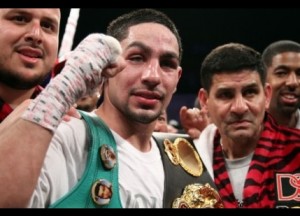 After an uneventful first round, Garcia came out in the second and blasted through Boxrec’s no. 71 ranked lightweight, scoring three knockdowns, each more brutal than the last, until Salka was splattered on the canvas and in need of quick medical assistance.

As predicted, this was an ugly affair capping off a night of mismatches that were better left off of premium cable.

In the co-feature, Lamont Peterson (33-2-1, 17 KOs) showed why he was a 25-1 betting favorite coming into this bout as he thoroughly dominated Edgar Santana (29-5, 20 KOs) for nearly ten full rounds before a well-timed commission stoppage.

Peterson, in the third defense of his IBF junior welterweight title, battered the forward-marching Santana to the body mercilessly and to the head at will, winning each and every round before the stoppage.

In the televised opener, Daniel Jacobs (28-1, 25 KOs), fighting in front of his hometown Brooklyn crowd, did the job he was expected to do against Australia’s untested and physically limited Jarrod Fletcher (18-2, 10 KOs) and won via fifth round stoppage.

Realistically, Jacobs could’ve ended the fight in the first as he dropped and hurt his challenger and proved himself then and there to be the far superior fighter. Instead, though, Fletcher made it through the round while Jacobs took his foot off the accelerator a bit and coasted until the latter half of the fifth round when a small Fletcher rally earlier in the round spurred him on to attack.

It would take one more knockdown at the hands of a dominant Jacobs to convince the ref as well as the commission that Fletcher was done.