Welcome to another edition of What If, where we play with hypothetical situations from boxing history: 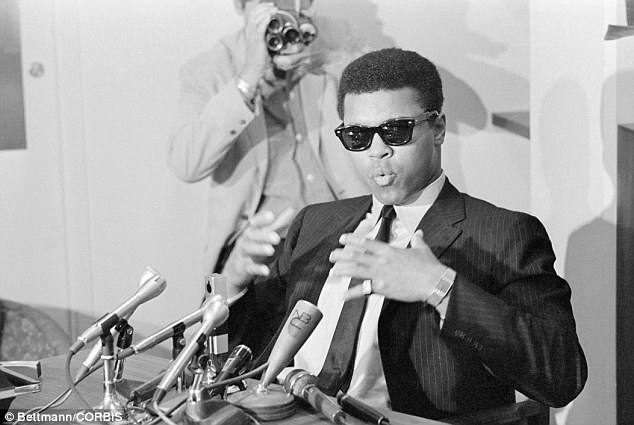 On April 28, 1967, the New York State Athletic Commission revoked the boxing license of Muhammad Ali, after he was arrested in Houston for refusing to enter the armed forces of the United States when he was drafted for service in the Vietnam War. That much is common knowledge. Ali would not fight again until October 26, 1970, when he knocked out Jerry Quarry in three rounds. After a win over Oscar Bonavena two months later, Ali earned a title shot…and his first professional loss at the hands of Joe Frazier in the “Fight of the Century” on March 8, 1971. Ali would not regain the lineal heavyweight championship until he took it from George Foreman in the “Rumble in the Jungle” in October of 1974.

Which essentially means that the United States Army cost seven years of a man’s prime, all because of a conviction for draft evasion that was overturned by the Supreme Court on the grounds that Ali’s conscientious objector status had been improperly denied by the Army authorities in Houston, where Ali lived at the time of his would-be induction in 1967.

But what if, when Ali had been drafted and refused on grounds that his Islamic faith precluded his participation in war, the government, perhaps not willing to risk an excess of civil unrest in the black Muslim communities that at the time were a major thorn in its side on the home front, had granted that conscientious objector status and allowed Ali to legally exempt himself from military service?

If that happened, the NYSAC had no grounds to strip Ali’s boxing license, and the WBA would likely not have stripped Ali of his championship belt (the WBC did not). So let’s turn the clock back to April 28, 1967, and ask the question of how the next four years of boxing history would have gone.

Ali was two months removed from perhaps the most devastating victory of his entire career, the infamous “What’s My Name” fight against Ernie Terrell, a beatdown so sadistic and so cruel that it is a wonder that referee Harry Kessler did not stop the fight. Ali carried Terrell just enough to keep the fight from ending in a knockout, preferring instead to administer punishment across all fifteen rounds when Ali himself was in nothing even approaching danger.

Ali was the WBA titlist, but did not hold the WBC belt; while the WBC was officially formed in 1963 (and had existed in a prototype form the previous year), it did not crown a heavyweight champion until Joe Frazier earned that honor with his victory over Jimmy Ellis in 1970. So let’s focus this purely on the WBA’s “official” title lineage, the one Ali found himself stripped of, for purposes of this story.

There were plenty of worthy contenders for Ali’s crown. Jimmy Ellis, Jerry Quarry, even Floyd Patterson, whom Ali had defeated in November of 1965. A young Joe Frazier, who had beaten Bonavena in 1966, was considered, but chose instead to fight George Chuvalo in New York in July; his handlers felt that a title shot would be too early in Frazier’s career and wanted to focus on developing their fighter rather than throw him in against a man who’d become the most feared force in sports. Ellis decided to fight Quarry; he would go on to win that fight by decision and set up a later shot against Ali (more on this in a bit).

Left with the opponent who was available, Ali feasted on Bonavena, establishing early that the Argentine could not get through his jab, much less stand up to his power shots. Bonavena made the mistake before the fight of trying to paint Ali as a coward for refusing military service; Ali, enraged, decided that Oscar was not even worth carrying like Terrell. Three brutal knockdowns in round four brought an end to it, and a merciful one at that. Ali was still the champ, still the Greatest, and took the opportunity after the fight to brag to Howard Cosell that “Ain’t nobody gonna stop me, no Oscar Bonavena, no US Army, no Viet Cong, I’m the greatest.”

Once again, Ellis considered choosing different prey rather than going after the title shot, as talks were well underway to have Ali fight Thad Spencer, who was still ranked #3 in the world by Ring Magazine after beating Ernie Terrell in a fight in August. Spencer instead decided to fight Joe Frazier; Frazier handed Spencer’s ass to him so badly that Thad would never again win a professional fight, retiring three years later after a nine-fight stretch starting with Frazier in which his record sank from 32-5 to where it would end up for history: 32-13-1, with losses against ever-weaker competition after Leotis Martin effectively ended all question about the value of Spencer’s career in the follow-up to the Frazier fight.

After Ellis defeated Quarry, the stage was set for Ali to handle him, and handle him Ali did, dropping him in the fifth, seventh, and tenth rounds before delivering the coup de grace in the eleventh.

What had the potential to become utter chaos in the heavyweight division was now fully sorted. Ali was and remained the greatest, the undisputed champion, destined for greater things and a long title reign through the end of the Sixties and into the Seventies. There was only one serious contender left in his way; with Ali himself having handled Ellis and Bonavena, with Quarry having fallen to Ellis and Spencer having fallen off the map, with Leotis Martin not seriously considered a threat, and with the fighters that would make fights with Ali in the following decade still in the amateurs, only one man remained, and the Fight of the Century was on.

All the narratives that would define the “real timeline” version of this fight were in play, but the racial tensions between Ali’s connection to the Elijah Muhammad wing of the Black Muslim movement and Frazier’s perception as an Uncle Tom figure were turned up to eleven when, in the lead-up to this fight, Dr. Martin Luther King Jr. was assassinated in Memphis on April 4th. Bedlam ensued across America, but the heavyweight championship of the world became even more of a flash point than it had already been. White America put its support behind Frazier, which only amplified Ali’s rhetoric.

The scene outside Madison Square Garden was tense the way Watts had been tense before things blew up in 1965, or how Chicago would become tense later in the year after Bobby Kennedy met his end in June and the Democratic National Convention had to go on amid all of that. Police, dressed in riot gear, looked prepared for the worst, and the media seized the opportunity to question who was safer that evening; Americans fighting in Vietnam or the cops on our very own soil.

Thankfully everything went off without incident, but Ali-Frazier, the Fight of the Century, a fight that deeply divided the black communities across the nation, was more than a boxing match. This was a referendum on whose side you were on, on what kind of person you were.

The fight itself? Ali was fresh, he was ready, and he had a supreme confidence about him that was more than mere bravado, it was the product of an uninterrupted reign as heavyweight champion that was entering its fifth year. There wasn’t a man alive who could touch Ali that night, as the Greatest Of All Time peppered Frazier with jabs, punished him to the body, and found Frazier’s weak points with impunity. Shades of the Terrell fight, as Frazier, psychologically broken from the first knockdown in the third round as Cosell’s “Down Goes Frazier!” call reverberated through the dark night via the television airwaves, never could muster a proper response. The knock on Joe Frazier was always that he would wilt if pressure got to him early, and that ghost haunted the man from Philadelphia this day.

Frazier failed to answer the bell for the fourteenth round, sparing the last six minutes of sadistic pleasure for Ali. The fight was over, and something inside Joe Frazier broke that evening. He would never again be the same fighter; later losses to Jimmy Ellis and Jerry Quarry ensured that Frazier would never rise above the level of the NABF titlist. Finally, a rematch in 1971 between Frazier and Ali settled all doubt, as on March 8, four rounds of boxing was all it took to effectively end the career of Smokin’ Joe Frazier, who surely must have wished that the Army had taken Ali in or at least ended, however temporarily, his title run so that Frazier himself could have learned to be a champion before facing the greatest fighter the sport had ever or would ever know. Frazier would pass away remembered as just another opponent in the greatest title run ever seen in the sport.

Ali, for his part, continued to fight on until in 1973 Ken Norton, always his bugbear, would break his unblemished record which by that point had run all the way up to 45-0. Eventually, after a rematch with Norton proved successful for Ali, and after disposing of everyone great and small, a 35-year-old Muhammad Ali, fresh off a win over Earnie Shavers, announced his retirement on July 16, 1977, saying that after a career in which he assembled a 53-1 record, knocking out 38 of those opponents, it was time to get out while he still had his health. Many of the effects of his last few fights in the real-world timeline, to say nothing of his epic wars with Frazier, never showed themselves in this alternate historical path; at the same time, history never softened to Ali, and he remained a divisive racial figure in American politics for the rest of his days.

But as a fighter? Oh, what a career Ali had, all because the prime of his life and his fighting prowess got to play out without legal interference.

Fox Doucette writes the What If series for The Boxing Tribune. From 2011-2013, he covered Friday Night Fights for this publication. Disagree with his view on Ali? Think he’s being too hard on Joe Frazier? Got a suggestion for a future edition of this column? Fan mail, hate mail, and females can be sent to beatcap@gmail.com.