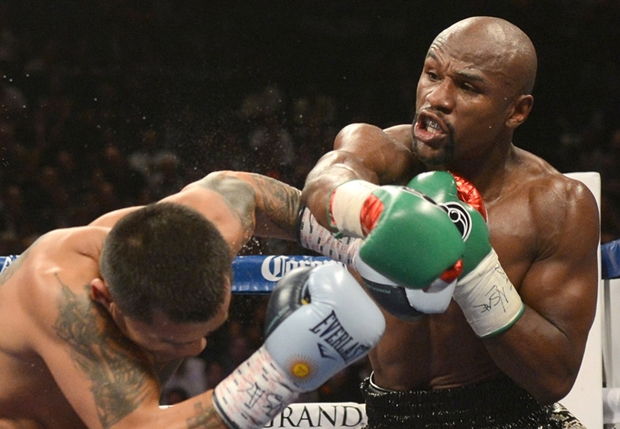 The days after a Floyd Mayweather victory are sobering moments for Mayweather’s dedicated legion of detractors, critics, and full-time anti-fans.

Yes, he’s cruised to victory again and the catcalls and agenda-fueled shouts of “he’s ducking so and so” and “he’s a cherry-picker” won’t bring much solace to the anti-Mayweather mob until there’s enough time and space between the excuses and what everyone sees as the reality.

Somewhere in fantasy land, there’s a holding pen full of wonderfully qualified, uniquely gifted welterweights who can easily beat Mayweather, but will tragically never get a chance.

And that mass of fire-breathing Money-crushing machines is next to the boxing academy that draws up fantasy strategy plans for the loathsome Mayweather. Here, that cowardly cad stops everything he’s doing successfully, mid-fight, and offers up his chin on a platter, like a brown piñata waiting to be cracked by his opponent’s fist.

Next to this Bizarro World boxing academy is the church where all the hand-wringing, blood-loving saints who revel in two human beings slowly killing each other come to deliver sermons. “Mayweather is a serial abuser of women!” they cry while still sporting erections from the morning’s viewing of a particularly bloody and deadly “classic” fight.

But in the days following yet another Mayweather win, fantasy land is closed and there’s nothing to face, but the cold, hard truth.

The truth is that there is not some undiscovered collection of fear-inducing welterweights out there. Aside from the forever-mentioned Pacquiao, who hurls challenges from a rowboat rowing in the opposite direction, issuing “let’s fight” rhetoric only after firmly signed to fight someone else, there are no supreme, fear-inducing Mayweather-crushers out there. Whether Mayweather’s opponents are hand-picked or not is a moot point when nobody is uniquely qualified to beat him.

In terms of in-ring strategy, Mayweather isn’t likely to tee up his chin and give up a win for the benefit of a public clamoring for a comeuppance.

And, no, Mayweather isn’t in the running for Pope as the figurehead of a sport so corrupt that even the U.S. government has a “hands off” policy regarding its regulation. The morality police in boxing sound foolish claiming the moral high ground while dabbling in a blood sport for fun and profit.

But the beleaguered Mayweather stalkers can take solace in the fact that Mayweather is now, without a doubt, showing real signs of aging. Blind fanboys will deny this, but the proof is on video. It was there on Saturday night against Maidana and it’s been there for quite some time now. At 37 years of age, Mayweather is beginning to slow down. The reflexes aren’t as swift and the movements aren’t as crisp. By the end of twelve rounds with Marcos Maidana, Mayweather was clearly gassed. At this pace, there is a greater chance of him losing each time he steps into the ring.

From the incredibly incorrect judges’ scorecards, it’s also quite obvious that Mayweather is no longer an untouchable darling of the Vegas fight scene. The 115-112 score for Mayweather from judge Guido Cavalleri would’ve gone on to be the laughingstock scorecard of the evening if not for Robert Hoyle’s disgusting 119-109 card for Mickey Bey over Miguel Vazquez. One gets the feeling from recent way-too-close scores that the power structure is just itching to shank Mayweather in the kidney. It’s just that this particular fight was too one-sided to facilitate the forced torch passing and Maidana isn’t the right guy to be handed the torch, anyway.

Another “bright side” talking point for the Mayweather lynch mob is that this pay-per-view is likely to be a financial bomb. Burdened by a crap undercard, bad publicity, and an uninspired forced rivalry in the main event, it’s doubtful that “Mayhem” captured the buying public’s attention to any great degree.

So, yeah, there’s reason for the anti-Money crew to be happy. No man escapes time and Mayweather, despite still being well ahead of the pack, is clearly winding down a long career. Like anyone with a nine-figure bank balance, Mayweather appears to have grown weary of war and all the media prodding that goes along with selling that war.

One way or another, Floyd Mayweather will be gone soon enough. The blind, celebrity-loving fans and bitter, agenda-driven haters will have one more year to violently debate with one another whether a boxing world with Mayweather is better than one without Mayweather.

You can email Paul at paulmagno@theboxingtribune.com or visit him in his tipi in the alley behind the International Boxing Hall of Fame. You can also buy his book, Notes from the Boxing Underground! Paul is a full member of the Burger King Kids’ Club, a born iconoclast, and an ordained minister in the Universal Life Church.