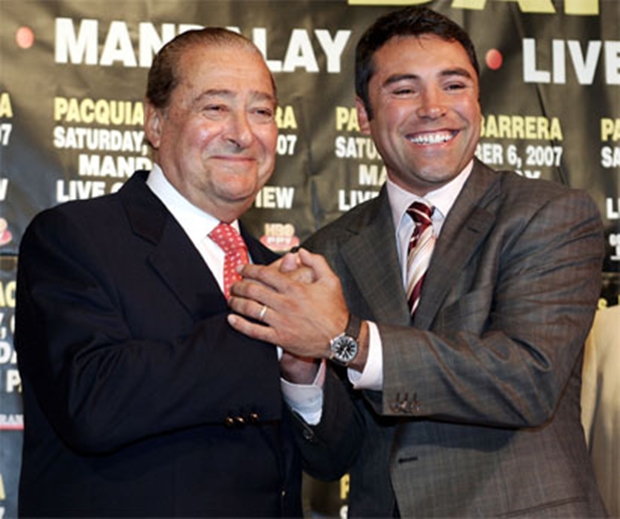 Last week, Golden Boy owner and founder, Oscar De la Hoya had a meeting with Top Rank owner and founder Bob Arum. The brief meeting generated warm and fuzzy headlines about the thawing of the “Cold War” and renewed fan talk about dream Top Rank vs. Golden Boy match-ups. The reality behind that meeting, though, could be a lot heavier than most would ever imagine, involving a new all-out war in boxing and a power play of epic proportions.

If a boxing world war is set to begin, the spark that sets off hostilities can be found buried deep in the heart of an ambitious and resentful Saul “Canelo” Alvarez.

The 24-year-old red-headed Mexican star has been grumbling for years about wanting to take back Cinco de Mayo and Mexican Independence Day weekends (in May and September respectively) from Floyd Mayweather and make boxing’s biggest weekends once again about showcasing Mexican talent. Alvarez had his chance to take back the holidays by force, but failed in his man-to-man efforts against Mayweather in September of 2013.

But the ever-persistent Canelo, with two straight low-level pay-per-view successes under his belt since then and a premium cable showcase coming up in December, is still pushing for the return of his national holidays.

As one of the very few Golden Boy fighters actually signed to Golden Boy contracts these days (thanks to an apparent collusion between former Golden Boy CEO Richard Schaefer and powerful advisor Al Haymon), Alvarez carries a lot of power within the company and is apparently willing to use it. And, in this case, Oscar De la Hoya seems more than happy to oblige.

Reportedly, De la Hoya’s meeting with Arum was to lay the groundwork for a possible Alvarez-Miguel Cotto bout on May 2, on the same date Floyd Mayweather proposes a return to the ring. Cotto is a promotional free agent, but still has a good working relationship with former promoter Arum.

“I’m not sure what plans Mayweather has, or what opponent he is fighting,” De La Hoya told Lance Pugmire. “Canelo gave me strict orders that he wants May and September next year, so as his promoter, I’ll obviously try and make that happen.”

A couple of days later, De la Hoya would repeat himself, this time to Boxingscene:

“I have orders from Canelo. He wants to fight on May [2] and I, as his promoter, have to get him a fight on these dates.”

But De la Hoya is no mindless pawn in a Canelo Alvarez temper tantrum. He (and Arum) understand quite well the importance of those two dates and what they mean, symbolically, to Mayweather and his team. He also understands how conflicted the Nevada State Athletic Commission (NSAC) would be in deciding whether to grant permission for two major pay=per-view cards to take place simultaneously in Las Vegas.

“It all depends on what fight we have,” Oscar told Pugmire. “If we’re going to do Miguel Cotto vs. Saul ‘Canelo’ Alvarez, who wouldn’t want that fight? The only fight that is bigger … is Manny Pacquiao vs. Mayweather, and we don’t think that’s going to happen any time soon.”

Although the NSAC granted permission for Alvarez vs. Josesito Lopez and Julio Cesar Chavez Jr. vs. Sergio Martinez to take place in Vegas on the same day in September of 2012, only Chavez-Martinez was PPV and neither was considered a true blockbuster.

Approving Canelo-Cotto and Mayweather-TBA for the same day would create all sorts of real conflicts and deep, deep resentments involving venues, networks, and all sorts of logistics.

It would also likely spell financial disaster for a Mayweather card, which will definitely carry the burden of a much heavier payroll and, as is usually the case with Mayweather shows, needs to reach that million sales mark before anyone even dreams of seeing a significant return on investment.

Canelo-Cotto, with a modest upfront for both fighters and a back-end full of sales-driven incentives would likely do well, or at least well enough to turn a solid profit and succeed in its primary goal– to take a deep and meaningful shot at the Mayweather/Al Haymon power base.

And therein may lie the real reason De la Hoya and Arum are brainstorming for the first time in over seven years. Maybe peace, love, and understanding is part of the coming together, but this reunion has been made easier to put together because both power brokers now have a common enemy, whether that enemy is mentioned in public or not.

While there is, for now, an uneasy working relationship in place between Golden Boy and Haymon, it’s imperative for De la Hoya to get back some of the power that slipped through his company’s fingers while Schaefer worked closely with Haymon and Oscar partied.

The first shot in this developing war was fired in August when De la Hoya, in a massive flexing of his muscles, sent Bernard Hopkins to sign to face Sergey Kovalev on HBO in a light heavyweight title unification bout, leaving behind Haymon’s Adonis Stevenson, who had jumped ship to Showtime from HBO precisely to take the perceived bigger-money, less risky fight against Hopkins.

With one swipe of the pen, De la Hoya and minority partner Hopkins turned Haymon’s second hottest property (behind Mayweather) into an inactive afterthought.

Now, Golden Boy, with the help of Arum and Top Rank, may have its sights set on long-time working partner, Mayweather. There is genuine animosity between Mayweather and De la Hoya and most everybody acknowledges that the five-division champ is only working with a Schaefer-less Golden Boy because there are no alternatives right now.

And, unless Mayweather, Haymon, and crew can put together a promotional alternative to Golden Boy with enough of an infrastructure, reach, and roster of available Mayweather foes to facilitate the promotion of a major PPV card by very early next year, it looks as though Mayweather’s days of absolute power over his domain are done.

Look for this game of chicken between Golden Boy and Mayweather to continue throughout the year and into early 2015. Things will get very interesting because, for the first time where Mayweather is concerned, Golden Boy may be in a position to not only avoid flinching and pulling away, but to hold their ground and play this though to the very end.