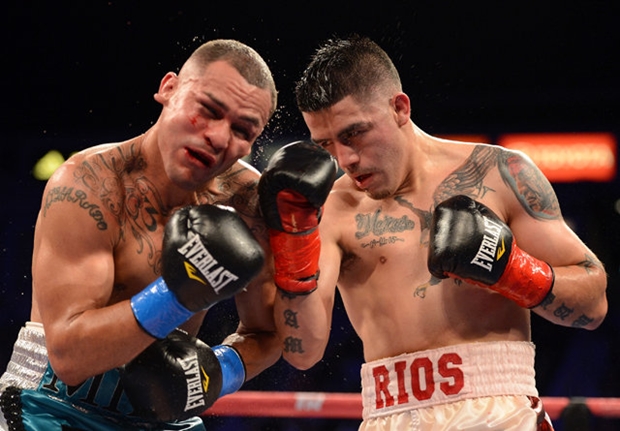 With a proposed rubber match between Mike Alvarado and Brandon Rios working its way through the rumor mill, is it safe to say their third meeting will provide the same fireworks?

Alvarado-Rios I was a Fight of the Year candidate. Both fighters put their undefeated records on the line in what would be a glorified showcase of guts and glory.

Rios would remain undefeated, stopping Alvarado in the 7th round.

A rematch was warranted as it left fans and scribes wanting more. Both fighters wanted it as well, as they both earned career pay days.

Five months later, everyone got their wishes. The bout started off just exactly how the first ended. Alvarado came out dry, with unsteady legs. In round 2, Rios stunned him with a jab, Alvarado looked like Bambi.

Alvarado recovered, and spent the rest of the night boxing his way to a close, unanimous decision. It was an exhilarating bout, both fighters were cut and bruised.

The post fight interview was just as exciting. They both called for a rematch, showing tremendous respect and gratitude towards each other.

Two years have passed and both fighters have seen better days.

Alvarado is 0-2 since the Rios bouts. He was badly beaten by Ruslan Provodnikov in his hometown. In his last outing, other then a knock down in round 9, Juan Manuel Marquez had his way with Alvarado.

Rios on the other hand, is 1-1. He was damn near a punching bag against Manny Pacquiao. Against Diego Chaves, a lesser opponent, he struggled to separate himself, skill wise.

Both fighters seemed to have started their decline in regards to skill and nutrition.

Alvarado has struggled to make the 140 limit in recent bouts

What should we expect from a third bout? Will it live up to the hype that Ward-Gatti did? Can both these warriors still compete at that level of excitement? Hopefully, they still can.

And hopefully neither (nor both) is seriously hurt in a rubber match.