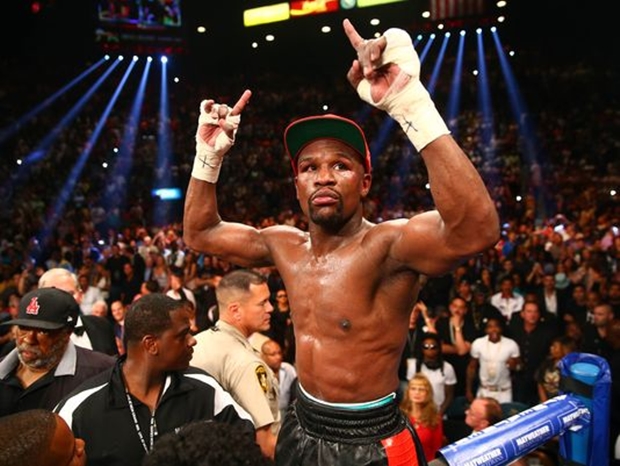 September 13 was not a good day for Floyd Mayweather.

Yes, he beat Marcos Maidana more convincingly than in their first encounter and took home a guaranteed $32 million, but it was clear to even the most untrained of eyes that something was not right.

Before the bout, he cold-marched to the ring without music and pageantry, the product of billionaire Warren Buffett’s people reportedly objecting to being too closely associated with Mayweather. (Buffett’s appearance on the All Access Showtime documentary preceded a scene showing Mayweather partying with girls while joints were being rolled.) Mayweather, in a huff, then nixed everything– leaving Justin Bieber and Wiz Khalifa with a ticket to the show, but no showcase for their “talents.”

From that point forward, Mayweather seemed ill at ease. From the introductions to the post-fight press conference, Mayweather labored to get through the minimum expected of him. He left the MGM Grand as he entered, with tired eyes and a seething frustration.

“I think when May comes around and you guys see All Access in May,” Mayweather told Fight Hype’s Ben Thompson after the post-fight circus had settled. “I’ll have a totally new team and probably a totally new staff. We may make a lot of changes in my team.”

Mayweather would also go on to talk about handwrap expert and cutman Rafael Garcia’s new role on the team (and out of his corner) as well as an apparent parting of ways with longtime assistant and Mayweather Promotions CEO Leonard Ellerbe.

“I think we’re just getting to a point where we’re outgrowing each other. I think I just see things my way and I think he sees things in another way. For example, this time around when I went out and fought, my WBC and WBA titles in both weight classes were on the line and I didn’t approve of that at all. That’s something I didn’t approve of. Also, my daughter was sitting in the front row and her mother wasn’t sitting next to her, so the ticket arrangements were totally wrong. It just got to a point to where everyone wants to do what they want to do instead of communicating and compromising like we used to. We got to this point by us communicating and compromising. If I’m not mistaken, my dad wasn’t able to work [Andrew] Tabiti’s corner, his fighter. My dad, he got all his stuff, the things that he needed for the fight, extremely late. That’s just very unprofessional. There’s just a lot of other things within our team that’s just not right. Leonard wasn’t in my corner, so, you know, it’s not any hard feelings. It’s just people outgrow one another. I’m not mad at him. There’s no hard feeling like I hate the guy; not at all. No hard feelings whatsoever. People just outgrow one another, just like when people get a divorce. They’re no longer on the same page mentally.”

Mayweather was reportedly upset by a number of mistakes involving logistics that his team made over the course of fight night. This would be Mayweather Promotions’ first real show where they, and not Golden Boy Promotions, did all of the heavy lifting when it came to planning. And while Mayweather did his part by showing up and beating Maidana decisively, the rest of the team dropped the ball, allowing disorder and confusion around many of the moving pieces of the show.

As a creature of habit, Mayweather may or may not implement these major changes. He may try to take the easy way out by keeping old members of the inner circle around while employing a new team– and, that, would be an absolute disaster for team morale as well as a breeding ground for discontent.

One has to wonder, though, whether all of this is really about title belts, ringside seats, and a failed Warren Buffett ring walk. It could be that Mayweather is now hearing clearly, for the first time in his career, the footsteps of father time. The five-division world champ has labored a lot harder to produce a lot less in his last couple of performances and this has to be as obvious to him as it is to everyone else.

The end is near for the future Hall of Famer and a new team may bring new joy and energy into the last year of his career. He certainly wouldn’t be the first fighter to change teams at the very end of his career, hoping for a quick fix to waning output and a momentary stoppage of the ticking clock.