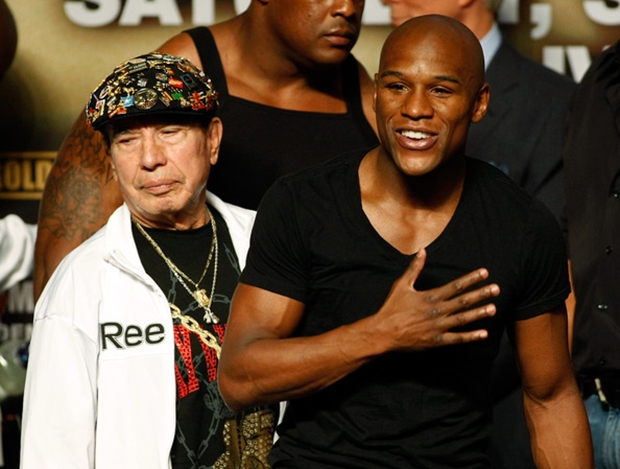 85-year-old cutman and handwrap virtuoso Rafael Garcia has spent more than seven decades in the sport he loves and has worked with the likes of Lupe Pintor, Roberto Duran, Alexis Arguello, Erik Morales, and Wilfredo Gomez, but Floyd Mayweather, according to him, will always occupy a special place in his heart.

However, the veteran cornerman feels that it’s now time to step away from Team Mayweather and walk off into retirement with dignity “before they push me aside,” but that he leaves on good terms and wants to “thank him [Mayweather] for everything.”

During preparations for the Marcos Maidana rematch, Mayweather experimented with handwrap expert Bob Ware at the suggestion of Alex Ariza, who Garcia feels may eventually become a permanent part of the team. Mayweather said that he was impressed with Ware’s work and decided to go with him and pass Garcia, who has been an integral part of Team Mayweather since 2001, off to Money Team lightweight Mickey Bey.

“Floyd told me to go with Mickey Bey for his fight against Miguel Vazquez,” Garcia told ESPNDeportes.com. “When I came back they were already taping him. I didn’t oppose to it, he’s the one fighting, not me”

“He hasn’t fired me,” Garcia would clarify. “I thanked him after the fight because I retired from boxing, but I’m fine with him. Thanks to him I live how I live…Maybe I’ll go to the gym and watch him and the others, but I’m all grown up, I want to enjoy life.”

Garcia plans on meeting face to face with Mayweather after Mayweather returns from his Miami vacation.

“When he comes back I’ll talk to him and I will thank him [and] tell him it’s been a pleasure to be with him,” Garcia said. “But now I’m leaving.”

Classy and proud, Garcia will be leaving the sport with dignity intact– something very few can say in the boxing business.

A native of Puebla, Mexico, Garcia took up boxing as a child, after tiring of having to walk to school several blocks out of his way to avoid a neighborhood bully. He would excel at the sport, becoming the star of the gym and eventually a 5-0 bantamweight until momentarily hanging up the gloves at his mother’s request. (Unbeknownst to his mother, though, he would continue fighting under an assumed name).

Eventually, Garcia transitioned from fighting to training and developed a reputation as a shrewd and loyal second, with a real skill for wrapping hands.

Garcia’s skills caught the attention of promoter Bob Arum, who in 2001 took him to Mayweather in an attempt to deal with his fighter’s increasingly brittle hands. The pairing was a success and Garcia has been a fixture within Team Mayweather until just recently.

[UPDATE:(3:52 PM) Several hours after going to press with this story, we were informed by Fight Hype’s Ben Thompson that, contrary to Garcia’s claim, Alex Ariza had nothing to do with recommending Bob Ware as a replacement to Garcia. According to Thompson, who has first-hand knowledge of the situation, the use of Ware began during an impromptu late night training session where Ware just happened to be present and Garcia was not.]