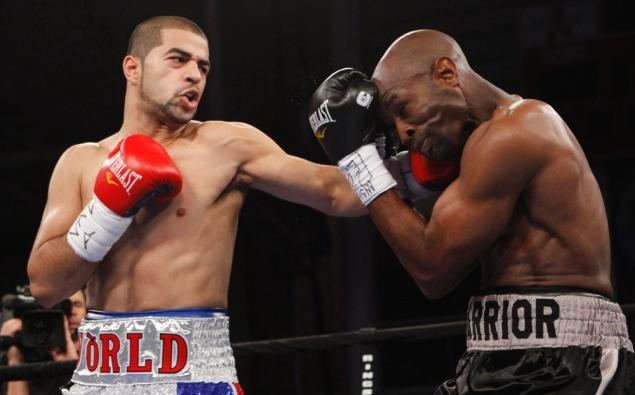 This “boxer vs. slugger” contest replaces the Kirkland-Rosado bout that was originally scheduled to open the telecast, and also represents a match-up of promotional outfits; Ali fights under the Golden Boy Banner and Abregu works for Top Rank.

The Argentine slugger is a huge step up for Ali, but for the Brooklyn native, the reward is well worth the risk; a win would undoubtedly propel his career to the next level.  No stranger to pressure or a tough fight, the two time NY Golden Gloves champ and current NABO/WBO Inter-Continental welterweight champ represented the U.S. in the 2008 Olympic Games and has fought multiple times in international competition before entering the pro ranks and his team is confident that he has the tools to pull off the win.  As Ali advisor Anthony Catanzaro told Michael Woods of The Sweet Science,  Abregu does have the power, “but Sadam can outbox him, has faster hands, faster feet.”

Abregu’s susceptibility to speed and movement can be evidenced in his loss to Timothy Bradley in 2010.  Bradley, in case you’re new to the sport, is a speed demon himself, and comfortably outpointed Abregu en route to a 12 round unanimous decision win, accounting for Abregu’s lone defeat.  Abregu in turn, came back with seven consecutive wins, among them, upsets over Thomas Dulorme (TKO 7) that earned him the vacant WBC International welterweight title, and Antonin Decarie (W 10) where he brought home the vacant WBC Silver welterweight belt.

The two fighters have met previously as sparring partners.  In 2010 while both were training for separate bouts (Abregu was preparing for Timothy Bradley) the two gloved up at Gleason’s Gym in Brooklyn for a number of sessions.  Said Abregu’s agent Sean Gibbons to ESPN, “the best sparring Abregu ever got was against Sadam Ali”.