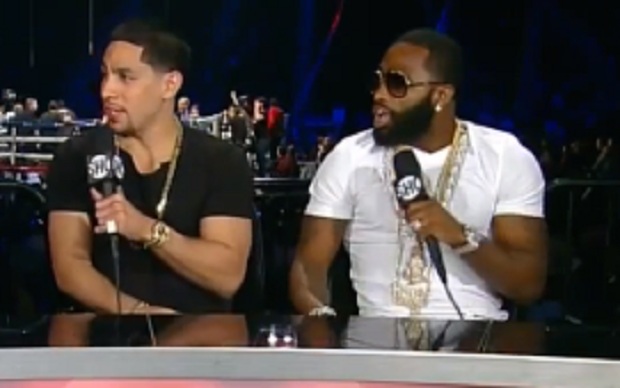 On this version of Match Makers corner, we’ll discuss a potential match-up between Danny Garcia and Adrien Broner

On a scale of 1-10 regarding marketability, a “high” 8 seems about right, before the press tour begins. Just imagine Broner and papa Garcia trading x-rated insults. These two might trade blows before their scheduled bout. With the high profiles of both fighters, if you add a suitable co-main,this easily could be a PPV event.

In Garcia, you have a hungry, but humble kid from urban America. Garcia is everything that represents Philadelphia– tough and gritty.

After a stretch that saw him defeat Khan, Morales, Judah and Matthysse in consecutive bouts, Garcia’s popularity was at an all-time high. People were calling for a move to welterweight to challenge Mayweather. However, he decided on a lower level bout against Mauricio Herrera in his mother country, Puerto Rico. He struggled through a majority decision victory in a bout many felt he lost.

After his bout with Salka, his popularity may be dipping. Critics and fans are questioning if he has the desire to compete at the highest level.

With his father and trainer, Angel, in his corner, Danny should welcome a bout with Broner.

AB, About Billion, Always Ballin. Adrian Broner is an entertainer, complete with flashing lights and an entourage. He’ll rap his way to to the ring, showboat through a win and have his father brush his hair during the post- fight interview. By the age of 23, he had captured his third world title, skipping a division and defeating Paulie Malignaggi for the WBA welterweight strap.

He was on top of the world, gaining more haters then fans, which means more popularity in sports. He felt untouchable, invincible. Marcos Maidana turned his world upside in 36 minutes.

Unfortunately, the loss didn’t humble Broner. You can still find him on YouTube or hosting parties. However, his credibility took a hit. Fans aren’t as impressed with his unbelievable skills against second rate opposition. He needs Garcia.

Garcia is known for his devastating punching power. He has the willingness to stand in the center of the ring and trade haymakers. Due to an extensive amateur career, he has undeniable boxing skills as well.

Garcia has a blend of power and speed, showing the ability to both outbox or stop his opponents.

Garcia is primed and capable of carrying the torch when fighters like Mayweather and Pacquiao retire. However, should he instead be positioning himself for a crack at them? A win against Broner could put him in the driver’s seat on his path to those high-profile bouts.

Broner’s hand speed is usually too fast for his opponents. He has sneaky power but it hasn’t carried to the heavier weights. He uses a highly effective shoulder roll but his footwork leaves him in bad positions. He has the tendency to pull shots, not sitting down on his punches.

He makes up for these mistakes with effective counter punching abilities. Also, he possess the ability to throw punches from weird angles and distances.

Since his defeat to Maidana, he has won 2 bouts against limited competition. Against Emmanuel Taylor, he fought in his hometown of Cincinnati, OH. Far from the bright lights of Las Vegas. Broner’s ego desperately needs this bout

It’s an interesting bout to say the least. Both fighters would gain an immense amount of respect and gratitude with a victory.

For Garcia, he would regain the momentum he lost following the Matthysse bout. It could drive him to becoming a PPV star.

For Broner, it would give him his signature win. It would go a long way towards erasing any doubts following the Maidana beatdown.

If the bout is signed and delivered, Garcia would open up as a betting favorite. The line would probably grow bigger as fans would pay to punch Broner themselves after All-Access.

In a mild upset, I believe Broner takes home the hardware in an instant classic.

Let’s put on Maidana-Khan II as the co-main.