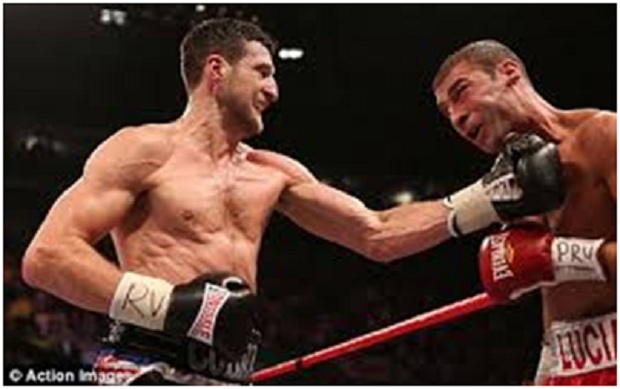 The Closers: Part One

This series would not be complete without mentioning some notable non-closers. And no, this is not going to be devoted solely to Floyd Mayweather Jr, though he is a prime non-closer given that his last non-controversial stoppage was when he bounced Rick Hatton’s head off the ring post back at the MGM Grand in Las Vegas back in 2007. Some might argue that he hasn’t even hurt anyone since the Hatton KO discounting, of course, the Ortiz debacle. If anything, Floyd is a quintessential cautionary fighter who relies on his marvelous technical skills to win decisions rather than risk going for the kill. Numbers don’t lie.

Some, like Carl Froch, smell blood and quickly turn predator; others are content to hit and run. For every Lucas Matthysse, there is a Miguel Vazquez; for every Miguel Cotto, there is a Sergio Mora. And for every Antonio Margarito, there is a Carlos “King” Molina. It simply is the nature of things.

In June 2005, Cesar Rene Cuenca (aka El Distinto) decked Andres Pablo Villafane twice en route to a TKO victory. Cuenca was 19-0 at the time and in his next fight he would beat the capable Carlos Wilfredo Vilches (43-6-2) by UD for the Argentina (FAB) light welterweight title. El Distinto would then engage in a long winning streak, but one without a stoppage victory raising serious questions about his power or lack thereof.

As a result of a UD victory over Ghanaian Albert “Tornado” Mensah (27-4-1) on May 3, this unknown Argentinean light welterweight, who turned pro in 2002, is now at 47-0 with just two KO wins. Here is one of his rare stoppages: http://www.youtube.com/watch?v=LnhiSDjBFus

So just how good is Cuenca? Let’s put it this way, he could well be the first fighter who retires with a 50-0 record and yet be destined to wither on the vine of obscurity. Exciting he is not. Said another way, until he beats someone of prominence, (and especially outside of Argentina) anything that is said about this distinct non-closer must be said with tongue-in-cheek.

American heavyweight Zuri Lawrence is another feather-fisted guy with a so-so record who slaps instead of punches, and has never stopped a professional opponent. He also is a tad chinny. Zuri finished his career in 2009 with a record of 24-15-4, but toward the end (in 2007), he gave Hasim Rahman all he could handle before losing on a TKO in the tenth and final round in Reading, PA. Zuri was ahead on the cards at the time and made the Rock’s face look like it had gone through a meat grinder. Zuri took the fight on short notice and was, to say the least, a big underdog. While he would never fight for a world championship, he showed uncommon courage and a champion’s heart in Reading, Pennsylvania on a chilly November night in Reading.

A year later, Zuri proved to be a party pooper as he totally dominated Albert “The Dragon” Sosnowski (43-1) in Brooklyn winning a UD. The Aviator Sports Complex was rocking with rabid Polish fans looking to celebrate the Pole’s birthday and an expected beatdown. But what the stunned and silenced crowd got was the reverse. Zuri came within a few punches of getting his first stoppage win. See: https://www.youtube.com/watch?v=s2ON18mzdfQ

In October 2005, Zuri won a solid UD over Jameel McCline in what may have been his career best, but he would get nearly decapitated by Calvin Brock in his next outing. A counter left hook knocked Lawrence out cold and referee Jay Nady immediately stopped the fight. This horrific sedation was named Ring Magazine KnockOut of the Year for 2006. See– but caution– not for the faint hearted: https://www.youtube.com/watch?v=6Cb5NsR1xng

Zuri ran hot and cold. When he was bad, he was very bad. When he was good, he was capable of beating a number of top tier opponents like Darrell Wilson, Paolo Vidoz, and King Ipitan. But the one thing Zuri could not do was close with a stoppage.

“I wasn’t happy with my performance. I could’ve finished him, I should’ve finished and I didn’t. I thought I had him. He got away and that is why he is still champion. I will tell you this. Samuel Peter is a great champion.” -Jameel McCline

As mentioned, one of Zuri’s wins came against the monstrous Jameel “Big Time” McCline. Jameel might have regained the big time had he finished matters against Mago Abdusalamov in 2012 and Samuel Peter in 2007. Against Peter, Jameel had him down at the end of the second round and then three times—yes three times– in round three and badly hurt but he simply could not close the show despite the fact he had more than two minutes left in the round. All he needed was just one more flush shot, but he let the Nightmare off the hook, Samuel came back from hell to win a UD. See: https://www.youtube.com/watch?v=6nmPqWgHMvQ

Against a prime Mago in Russia, Jameel was able to deck the Russian in the first round with a big right and was seemingly well in control, but then inexplicably (and suspiciously) he seemed to back off and that was that. McCline was KO’d by a phantom punch in the next round. The entire affair had a foul stench about it. See: https://www.youtube.com/watch?v=6nmPqWgHMvQ

This affable Chicago heavyweight had Pole Artur Szpilka down and ready to go in both of their thrilling encounters but could not close the action letting “Szpila the Pin” back into both fights. The Pin won both by brutal stoppage. Mike came oh so close but just couldn’t close when it was within reach.