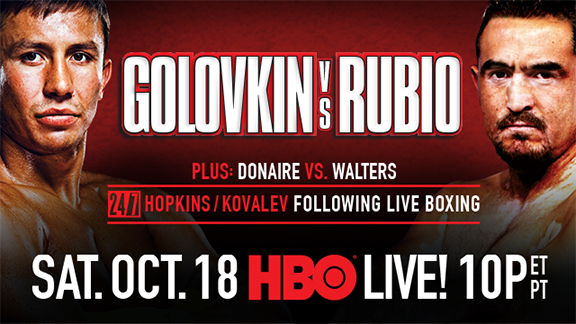 WBA middleweight Champion Gennady Golovkin (30-0,27 KOs) puts his title on the line this Saturday night, and makes his West Coast debut at the same time. Marco Antonio Rubio (59-6-1, 51 KOs) lines up across the ring and will be making his third run at a middleweight title. HBO will televise, with Nonito Donaire’s title defense against Nick Walters serving as the broadcast opener, and the Stub Hub Center in Carson, California will play host.

Golovkin is making the twelfth defense of the WBA middleweight belt he won against Milton Nunez in 2010. His choice of opponents has improved from the likes of Nilson Tapia and Makato Fuchigama, but the lone bright spot in his resume includes his July stoppage victory over Daniel Geale. The rest of Golovkin’ title defenses are made up of junior middleweight journeymen and recycled middleweight contenders.

Rubio hasn’t fought against a particularly high level of opposition, but he has nearly twice as many professional fights as Golovkin. Spanning a career dating back to the turn of the century, Rubio has taken on and lost to a prime Kassim Ouma, then-undisputed middleweight champ Kelly Pavlik, and Julio Cesar Chavez Jr.

Rubio is the current Interim champion for the WBC, with Miguel Cotto occupying the recognized belt. The winner of this fight may earn the leverage needed to get a big-money shot at Miguel Cotto next Spring.

To compare styles here would be something of an exercise in futility. As with most of Golovkin’s title challengers, Rubio’s style is tailor made for him. It would be easy to point to Rubio’s 2010 upset of David Lemieux as evidence to support the claim that this fight isn’t a lopsided mismatch, but Lemieux is a far cry from Golovkin. And while Rubio might be tough as nails, his lack of head movement and slow feet will make him a sitting target for Golovkin, who can land almost at will against stationary targets. Golovkin has shown that he’s willing to take a punch to land a few of his own, making him somewhat easy to hit.

Rubio is at his best when he’s on the offensive, throwing his right hand behind his jab. He’s shown good power throughout his career, but as stated earlier, Rubio has come up short every time he’s stepped up in class. Golovkin, however, looks his best when faced with an opponent who comes forward. His power is enough to break his opponents’ will, and he’s accurate and somewhat economical for a pressure fighter. Rubio struggles when forced to move back and fight off his back foot. Against Julio Cesar Chavez Jr., Rubio was forced to start moving back early on and he never posed any real threat to Chavez. It would behoove Golovkin to impose his power upon Rubio early in the fight and get him out of his comfort zone.

Expect Rubio to hang in there as long as he can on Saturday night. Golovkin is known for his body punching, and he’ll likely test the veteran’s mettle early on. Rubio is about as tough as they come, but he’ll wilt rather early under Golovkin’s comprehensive attack. It is the popular thing to look for the unlikely, root for the underdog, win one for the Gipper, etc., but the outcome of this fight will not be in doubt. Golovkin is a crowd pleasing fighter and loads of fun to watch, despite the stench of mismatch, covered up by a compliant media, and sponsored by HBO. Saturday night Golovkin will turn in another stellar performance and end the fight standing over the broken shell of his opponent, sometime in the fifth round.