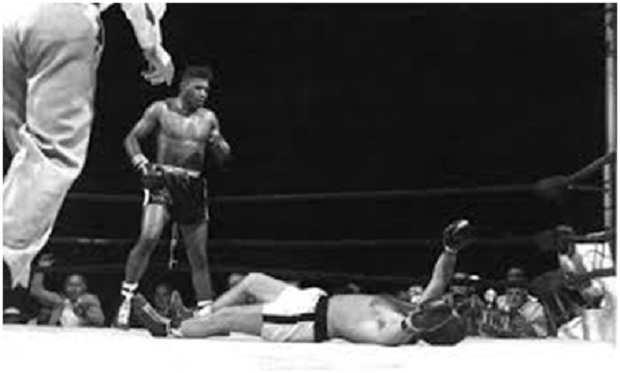 “It’s like being in love with a woman. She can be unfaithful, she can be mean, she can be cruel, but it doesn’t matter. If you love her, you want her, even though she can do you all kinds of harm. It’s the same with me and boxing. It can do me all kinds of harm but I love it.”—Floyd Patterson

“The stories about the fight said I went down nine or 10 times…the writers were being nice to me. I have the film. It was more like 12 or 13.”—Tom McNeely

At 21, Floyd Patterson became the youngest man to win the world heavyweight title. He was also the first heavyweight boxer to regain the title. His record was 55 – 8-1 with 40 wins by knockout. He won the Gold Medal at the 1952 Olympics as a middleweight.

Patterson was an introspective, soulful and decent man who ironically engaged in a violent past time and in so doing, managed to end up in the International B0oxing Hall of Fame. He was a skilled fighter who never ducked anyone and ran off three long winning streaks during his celebrated career. But among other things, he had a knack for getting involved in wild and one-sided outings—slaughters if you will. The first occurred in 1954 against Jimmy Slade.

Using his peek-a-boo style, Patterson decked Slade twice in the opening round, and once in the 2nd, 3rd, and 8th rounds on his way to a shutout win at Madison Square Garden over 8 one-sided rounds. Here is Slade getting beaten to a pulp: https://www.youtube.com/watch?v=FFXaQSGAWAw

It was game Pete Rademacher’s turn in 1956 when the Olympic Heavyweight Gold Medalist made his professional debut—Lomachenko style– against Patterson (32-1 at the time). Rademacher was knocked down six times, Patterson was knocked down in the 2nd round. The end is not pretty. Here it is: https://www.youtube.com/watch?v=irumwJT_xsU

After a series of defenses against fringe contenders –Hurricane Jackson, Rademacher, Roy Harris and Brian London– Patterson met Ingemar Johansson of Sweden, the number one contender, in the first of three thrilling fights. Johansson triumphed over Patterson on June 26, 1959, with the referee Ruby Goldstein mercifully stopping the fight in the third round after Ingo had knocked Patterson down seven times—yes seven–times. Johansson became Sweden’s first World Heavyweight Champion, thus becoming a national hero as the first European to defeat an American for the title since 1933. This time it was the favorite, Patterson, who was on the wrong side of a beatdown. https://www.youtube.com/watch?v=VsVajIK_UUc
Patterson later regained his championship by knocking out the Swede with left hook from hell that had an unconscious Ingo’s feet twitching.

Heavyweight Champion Floyd Patterson defended his title against tough and undefeated Tom McNeeley (23-0). McNeeley, who was a celebrated amateur fighter at Michigan State University where he also played football, was officially decked eleven times in a title bout in 1961 in Toronto before the fight was finally stopped by an overly tentative referee Jersey Joe Walcott. But even in round 4 when the fight was stopped, The game McNeely was fighting back with vicious stuff and had Patterson wobbled a bit. Here is the fight: https://www.youtube.com/watch?v=nHYEwbmLXI0

There were few things more enjoyable than watching Floyd Patterson in his prime.