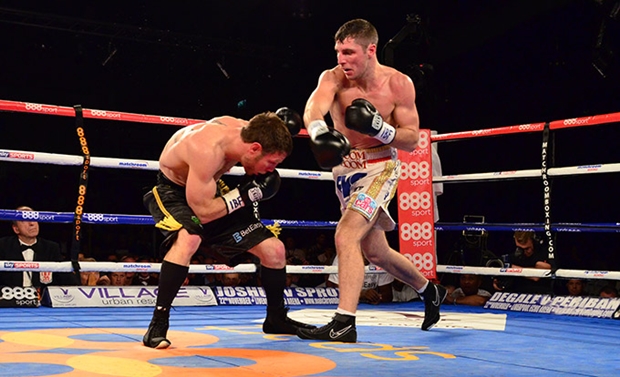 For a good portion of the first round at the Hull Arena in Hull, England, Michael Katsidis bore a passing resemblance to his old 2006-2008 self, hard-charging the UK’s Tommy Coyle and looking hell-bent on inflicting damage.

But the 2014 Katsidis was at least a full step slower than the old “Great” Katsidis and he was never able to do any serious damage to the moderately-talented Coyle. By the second round, Katsidis’ rush forward was slower and infinitely more predictable.

Then, the lights went out.

Dropped to the canvas by a left hand counter to the temple, Katsidis was able to beat the referee’s ten count, but was clearly in no shape to continue.

British battler, Coyle (20-2, 9 KOs) would get the biggest resume-stuffer of his career while Katsidis (30-7, 24 KOs) gets another sign that his career is finally finished.

Hopefully, Australia’s all-action Katsidis will settle into a nice post-boxing life and resist the temptation to take one more run at glory. There’s no doubt, however, that his phone will be ringing with offers from every young lightweight or junior welterweight with a resume to pad.

Coyle, meanwhile, seems headed towards a showdown with fellow regional talent and close friend, Luke Campbell, who was also victorious on Saturday’s card.

But, for now, Coyle seems happy just drinking in the glorious victory over the biggest name he has ever faced.

“I’ve followed Michael’s career from day dot,” Coyle told Sky Sports. “What a fantastic talent and it was an honour to share a ring with him. I’m lost for words. I can’t believe I have KO’d him. I’m on top of the world.”