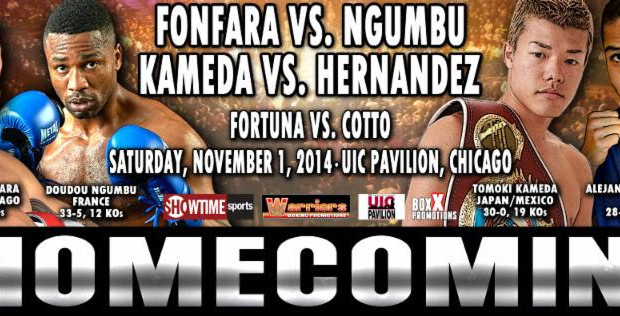 Fonfara was last seen in May, giving WBC light heavyweight champion Adonis Stevenson all he could handle. In what was supposed to be an evening of showcasing his talents, Stevenson saw Fonfara overcome a trip to the canvas in the first round only to put Stevenson down in the ninth. Fonfara’s late rally and success down the stretch proved to be too little, too late, and he came up short in the end. But for his efforts, Fonfara was given his own moment to shine against an unknown, untested opponent making his debut on American soil. With a win, Fonfara puts himself in position to warrant a rematch with Stevenson and becomes a serious player in the division.

Ngumbu is here to look good in defeat. His record is a decent one, but lacks any wins over notable opponents. Ngumbu’s best wins have come against former world title challengers Vyacheslav Uzelkov and Aleksy Kuziemski, both hand-picked soft touches for former protected light heavyweight beltholders Beibut Shumenov and Nathan Cleverly respectively.

Fonfara works best against fighters lacking mobility. His straight up and down, high guard style is far from impenetrable. But he has good reach and timing. Against Stevenson, Fonfara was able to establish a rhythm with his jab, and after hurting Stevenson Fonfara was able to control the pace of the fight.

Fonfara has everything to gain, and also everything to lose. Fonfara was given a chance to shine after a near upset over one of the light heavyweight division’s best, and any hopes of continuing on an upward trajectory rest in his ability to handily dispatch a fighter whose best hopes lie in making the fight ugly. Fonfara’s long jab and right hand will be key. Settling into a rhythm and keeping Ngumbu off balance on the outside will be his primary focus, with the stoppage win being the added bonus.

While Fonfara has everything to gain, it is what he stands to lose that should motivate him. His solid technical ability and poise under fire lead one to believe his performance against Adonis Stevenson was no fluke. Ngumbu’s awkwardness will likely give Fonfara pause in the early rounds, but once Fonfara is able to settle in and establish the distance behind his jab, the late stoppage win will follow.