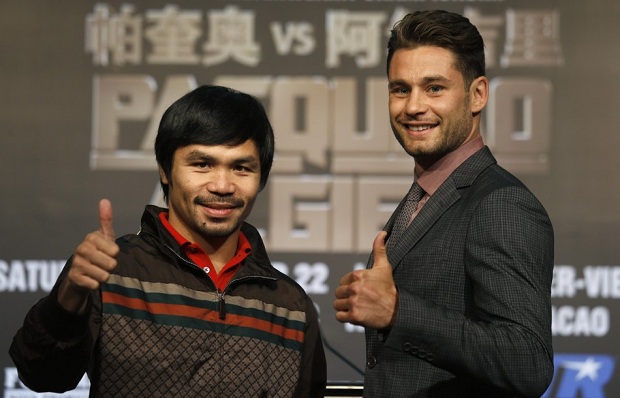 Those who follow the sport religiously and keep up with the ever-changing minutiae of big-time prizefighting know the odds of Huntington, New York’s Chris Algieri pulling off the upset (a whopping +600 for those who need confirmation). They know the history of Algieri and the fact that his one main stage victory– over Ruslan Provodnikov for the WBO junior welterweight title– was a controversial split decision that 54% of the polled media thought he lost. They know that his resume is painfully thin, more akin to that of an A+ club fighter, than a world class threat.

As such, selling Pacquiao-Algieri to boxing’s real fans was always going to be next to impossible.

But in the affable and articulate Algieri, promoter Bob Arum realizes that the possibility exists to take his push directly to the casual, less sophisticated fan. Arum appears set on reaching those who may have their curiosity piqued by the odd sight of a well-spoken 30-year-old with a Master’s Degree from an affluent community suddenly thrust into the spotlight of the sporting world’s Red Light District.

Before Algieri had even entered the ring against Provodnikov and before he was anything other than a basic cable time-filler, Arum had bigger things in mind.

“The fight that I’m going to try and zero in on and put together is Pacquiao vs. Algieri, after Chris beats Provodnikov on June 14th,” Arum told media.

And once Algieri did go ahead and beat Provodnikov, the Pacquiao plan was put into motion immediately.

Less than five months after the Provodnikov bout, it’s safe to say that Algieri has a higher profile among the casually curious fight fan than the know-everything hardcore boxing fanatic. He has been the subject of feature stories in the New York Daily News, the New York Post, and Los Angeles Daily News, among many others.

Where he hasn’t been featured all that much is on the websites dedicated to feeding the craving for news and info of boxing’s most loyal fans. Sure, there is talk of the fight, any Pacquiao fight will generate some degree of buzz, but the hard sell that accompanies most big money PPV bouts doesn’t seem to be there.

The reason is that, this time, it’s only about the casual fans. And what Algieri lacks as a credible, reasonable foe for the legendary Pacquiao, he more than makes up for as a curiosity to the marginally-informed outsider.