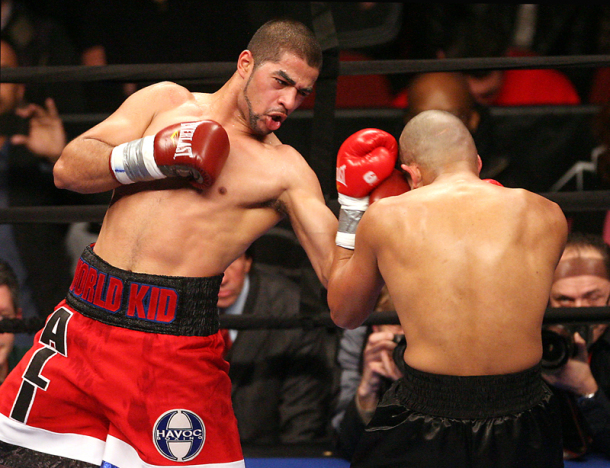 A look at the undercard attractions for the November 8 Bernard Hopkins-Sergey Kovalev card at the Boardwalk Hall in Atlantic City, New Jersey:

Sadam Ali (20-0, 12 KO’s) vs. Luis Carlos Abregu (36-1, 29 KO’s)
In the night’s televised co-feature, Brooklyn’s two-time Golden Glove champion steps up in a fight that can really juice up his career should he win. He’s the current NABO and WBO Inter-Continental welterweight title-holder, a slick boxer; fast with his hands and feet. He has about half the professional experience of Abregu, but has been in the sport for nearly 20 years and has a wealth of experience as a world-class amateur, and represented the United States in the 2008 Olympic games. He knows exactly what he’s in for with Abregu, a heavy handed Argentine slugger whose only defeat came against Timothy Bradley in 2010. Since the Bradley contest, he’s stopped six of his seven opponents and has held the South American, WBC International, and WBC Silver welterweight titles. His difficulty with speedy fighters was evident against Bradley, so Ali has a real shot in this one as long as he can handle Abregu’s punch.

Vyacheslav Glazkov (18-0-1, 11 KO’s) vs. Darnell Wilson (25-17-3, 21 KO’s)
Glazkov has some momentum coming into this contest, coming off two big wins over former world light heavyweight and cruiserweight champion Tomasz Adamek and former USNBC heavyweight champ Derric Rossy. The Adamek win earned him the IBF North American heavyweight crown, which isn’t being defended in this bout. Known as “The Czar”, he’s climbed the ranks by steadily increasing his level of opposition without biting off more than he can chew too early. Konstantin Airich and Tor Hamer are among his earlier wins as well as a draw against then 35-0 Malik Scott last year. He faces Wilson, the “Ding-a-Ling man”, who comes in off a sixth round knockout of undefeated David Rodriguez nearly a year ago, but had lost 11 of his 12 prior bouts and has been stopped on five occasions.

Nadjib Mohammedi (35-3, 21 KO’s) vs. Demetrius Walker (7-7-1, 4 KO’s)
Fighting out of France, the former WBA Continental light heavyweight title holder faces mediocre Kansas City resident Walker, who had a decent start as a super middleweight, but hit the skids once he moved up and has now lost seven of his last eight contests.

Vyacheslav Shabranskyy (10-0, 8 KO’s) vs. Emil Gonzalez (13-8-1, 10 KO’s)
This is Shabranskyy’s first 10 round bout; he comes in off a first round knockout of the aforementioned Demetrius Walker earlier this year. Gonzalez’s last few bouts were at middleweight, so how he ended up in a 10 round light heavyweight fight is anyone’s guess.

Eric Hunter (18-3, 9 KO’s) vs. William Gonzalez (27-5, 23 KO’s)
Hunter is a Philadelphia featherweight and the current USBA champ. His last two losses in 2010 and 2013, both came by way of DQ. He holds wins over Jerry Belmontes and Yenifel Vicente. Gonzalez is the NABF titleholder, winning the belt with a seventh round knockout of Cornelius Lock earlier this year. That was his second stoppage win since disappearing for 15 months after a pair of back to back in 2011.