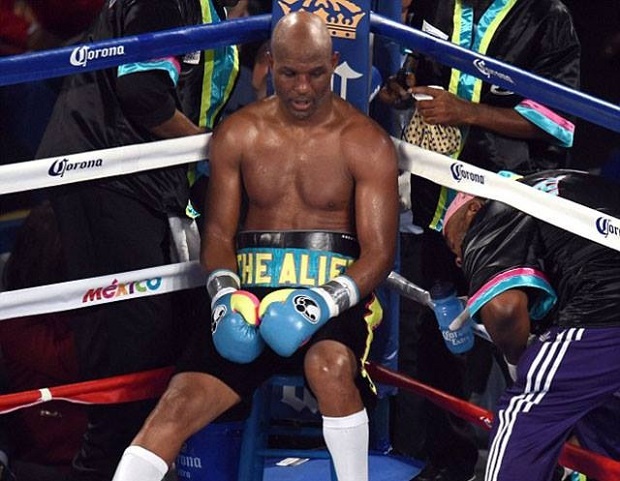 Hola familia y amigos, welcome to an extraterrestrial tinged episode of Central America’s highest-grossing, hardest-hitting weekly pugilistic paper, The Sunday Brunch – We are the mythos of bronze-age goat herders, re-written hundreds of times, by thousands of people and finally translated into American English. We’re taking a glance back at the great, the legendary Bernard Hopkins in perhaps one of his final moments inside of a squared circle. Hold on to your dentures and pack yourself a lunch, we’re about to ninja star our brand-new laptop through the windows of the HP corporate offices. So, without further ado, I gave you your instructions in the dressing room; what I say you must obey – Cuidate, escucha me, toca los manos y buena suerte…Let’s get it on!

Sergey Kovalev must have read the top 8 Things that he needed to do to defeat Bernard Hopkins. The Krusher not only executed a near perfect game plan, but won an absolute shut-out victory over a genius in the sport. There is no doubt in my mind that Kovalev is the man to beat at light heavyweight…Stevenson, are you hearing this? Pouvez-vous comprendre les mots qui sortent de ma bouche?

Bernard Hopkins showed off his age-defying lateral movement, but didn’t really offer much offense-wise, not like how he normally handles younger and stronger foes.

Going backwards is a fine tactic during a professional prize fight (despite what some would have you believe) as long as you maintain the ever important ring generalship factor.

Guillermo Rigondeaux and Floyd Mayweather, both in-ring geniuses like Hopkins, often back-peddle towards a dominant win.

No, this was not the issue for the Philadelphia native.

Relative to the situation, Hopkins occasionally flashed good hand speed. He even managed to momentarily buzz Kovalev in the final round, but after the opening moments of the contest, when a crisp counter to the top of the head sent him to the canvas  – Hopkins became a gun-shy, survival-minded shell of what he once was.

And there is absolutely nothing wrong with a nearly 50-year old veteran not wanting to get pummeled to death by a man with an 85% knock out rate.

Despite taking some horrific punches in the final moments, Hopkins’ expert defense mostly allowed him to escape any sort of real damage and let him finish the thoroughly one-sided contest on his feet.

As for Sergey Kovalev, he intelligently cut off the ring and hunted down the old master; the Russian boxed smart and utilized his height and reach. Right now, it would seem that the Chelyabinsk Krusher is peaking and perhaps is unstoppable at the weight (Does Andre Ward fight anymore? Do you even box, bro?).

As Hopkins mentioned after the bout, Kovalev would attack, but when he did get hit, he’d then back off – rather than getting sucked into B-Hop’s game – causing the aging former champion to have to reset in each engagement. “He used his reach and his distance; that was the key to his victory…” The classy-in-defeat Hopkins would continue “…He also pounded his right hand over my jab. He’s a good technical fighter. I give him a lot of respect.”.

The Russian’s comments were equally as honest and respectful…”I was very excited he didn’t get into my head. It was a good fight and I’m so happy. He’s a tough opponent; he’s very good at keeping the distance. He’s a great in the boxing world. I wanted to show my fans that I can box and I did it. He touched me with some good punches and he has good form, I tried to knock him out in the 12th round, but he has good defense.”

I genuinely hope that Bernard Hopkins fights on. The man is a living legend and no sane person would discredit him for this loss after all he’s done in and for the sport. I would love to see him face Adonis Stevenson, or anyone really. We have to appreciate fighters like Hopkins while they’re still around…For all the negative things some people say about how he fights, his spirit epitomizes what boxing is.

Thanks for joining us again this week, we’ll be back next time with some more randomly assembled words, catchphrases and dangling participles. Don’t forget to check out AMC’s The Walking Dead tonight to see where “Team Abraham” goes after they left Rick’s group. Will Eugene get devoured by walkers? Will Glenn and Maggie split up? Will we ever have to hear any more of Beth’s horrid singing? Stay tuned for a full review. Until then, send all Devon Alexander has a huge head memes to JESSEBOXINGTRIBUNE@GMAIL.COM and publicly bash me on Twitter @JESSEBOXING. Ciao!