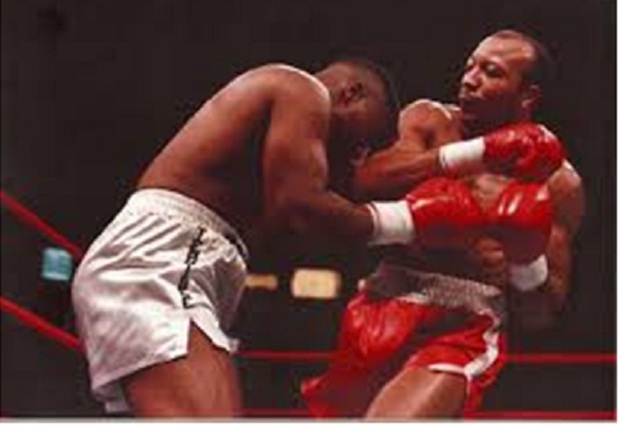 “I couldn’t get into the fight. I didn’t care about it.” – Tim Witherspoon

“I knew his mind couldn’t be on the fight. He wasn’t thinking about me. My plan was to be all over him. He embarrassed me the last time and I wanted to pay him back. I did.” – James “Bonecrusher” Smith

“James “Bonecrusher Smith showed a dramatic display of physical power, and I just think it was marvellous on his behalf. I’m not surprised. I know when two fighters are in there, anything can happen.” – Mike Tyson

James “Bonecrusher” Smith flew out of the chute at the opening bell and launched pure menace and malice and everything landed. He repeatedly blasted the champion, Terrible Tim Witherspoon, with right hand bombs. Tim was hurt in the early moments and a big right hand shot caused his knee to touch the mat, but Referee Luis Rivera missed it. But then Witherspoon walked into a solid left hook with about 90 seconds gone and was knocked almost through the ropes and down – for the first time in his career. He got up at the count of four on wobbly legs.

Smith never let up as he cautiously moved in sensing the kill’; then, he sent Witherspoon down in a heap with another big right hand. Terrible Tim got up at five, spit out a tooth root and all, and was in terrible shape as The Bonechrusher charged in. The staggering Witherspoon was met with a right hand that dropped him for the third time. Referee Rivera immediately invoked the WBA’s three-knockdown rule and waved the fight over at 2:12 of the opening round. There was some controversy as to whether the three-knockdown rule was applicable but it really was academic.

This one was an upset which added to the shock value. Also noteworthy is that Witherspoon did not land a single punch as he was blown away. Here it is: https://www.youtube.com/watch?v=plFl_VqLVvc