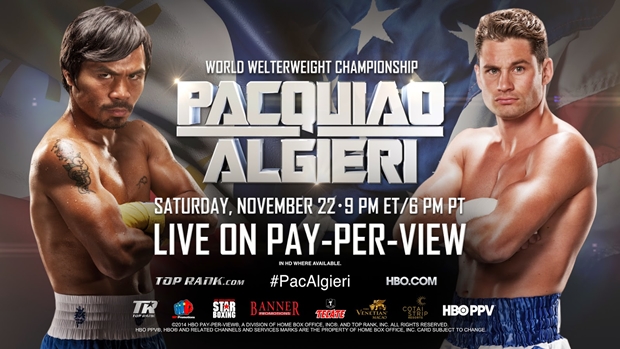 Saturday night, in Macao, China, eight division world champion Manny Pacquiao (56-5-2, 38 KOs) defends his WBO welterweight title against undefeated American Chris Algieri (20-0, 8 KOs). The fight will be Pacquiao’s second at Macao’s Venetian resort, and first since beating Brandon Rios there last year. HBO PPV will air the card, and Top Rank will promote it as part of its continued effort to grab a chunk of the vast Chinese market.

The last time Pacquiao fought was in April, when he avenged his 2012 controversial defeat to Tim Bradley. The wins over Bradley and Rios give him a two fight win streak since being knocked out by Juan Manuel Marquez three-years-ago. Head trainer Freddie Roach has predicted a knockout in just about every one of Pacquiao’s previous eight bouts. But instead, his pupil’s failure to deliver has brought about questions of whether or not he still possesses the killer instinct which made the world fall in love with him over a decade ago.

Algieri has spent most of his career fighting at the Paramount Theater in his hometown of Huntington, Long Island. In June, he made a name for himself by taking home the WBO 140-pound belt, in a narrow split decision victory over Ruslan Provodnikov. He also holds a win over Emmanuel Taylor on ESPN’s “Friday Night Fights”, which catapulted him to his first title shot. This will be Algieri’s second attempt at a major title this year, in two different weight classes—a fete which isn’t attempted often in the sport of boxing.

Pacquiao has power in both hands, uses side to side head movement to get inside, lands a combination and then with his quick feet, he’s at your flank before you’re able to counter. The times he’s gotten hurt—most notably during his fights against Marquez—have come during reckless exchanges, when he’s moving straight backward, or when he’s walked into one. Pacquiao’s at his best when he’s able to box around you in the middle of the ring.

The 30-year-old Algieri is a boxer who fights off of his back foot and uses a long jab to create enough separation to throw an effective left hook and uppercut. He could throw the occasional three punch combination with his lead hand alone, but he also found success in the Provodnikov bout with an overhand right. Algieri doesn’t typically attack his opponent, instead he uses solid lateral movement to lure them in and counter.

With Top Rank and Golden Boy once again doing business together, the winner of this fight will have a wealth of future opponents and lucrative opportunities to choose from. And in a year in which boxing has been flooded with pay-per-views—most of which haven’t delivered—we could only hope that this underwhelming card on paper, produces fireworks in the ring.