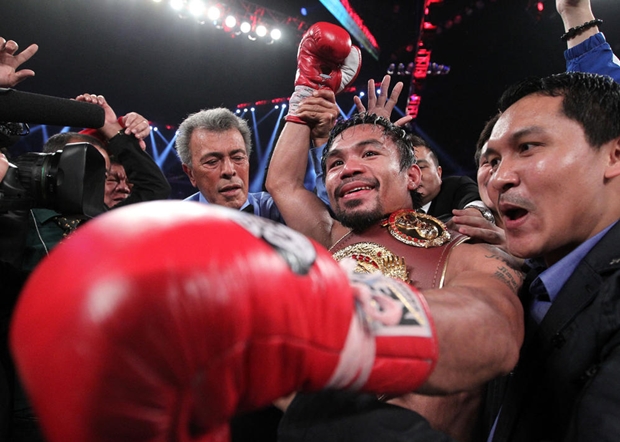 Defending WBO welterweight champ, Pacquiao barely played defense in this one, instead opting to stalk and headhunt his light-hitting opponent. Algieri, in return, was doing little more than playing prevent defense on the outside with occasional rushes forward, which were frequently countered by much more effective punches from Pacquiao.

A knockdown in the second round, two in the sixth, two in the ninth, and one more in the tenth paint the appropriate picture for this one-sided affair. Algieri simply had no answer for anything Pacquiao was doing and no effective plan to win the fight, despite trainer Tim Lane’s repeated insistence that they had the Filipino icon right where they wanted him.

Ultimately, though, Pacquiao missed out on scoring his first knockout in five years and Algieri did as well as could be expected of him by being on his feet at the end of twelve rounds.

Pacquiao-Mayweather talk would emerge in the post-fight interview, but take all of that with the appropriately sized grain of salt.

WBO featherweight titlist, Vasyl Lomachenko (3-1, 1 KO) outclassed Chonlatarn Piriyapinyo (52-2, 33 KOs) in every sense of the word, scoring a fourth round knockdown en route to a one-sided unanimous twelve-round decision by three scores of 120-107.