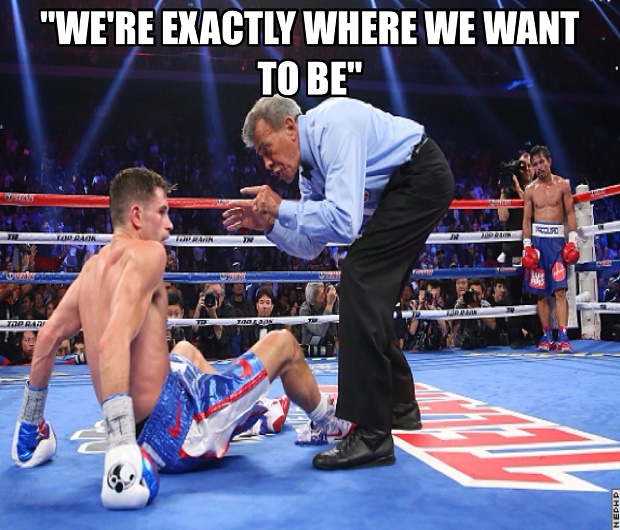 Welcome to a mean-spirited, pan-seared boneless flounder flavored edition of Long Island’s most hated proper pugilistic paper, The Sunday Brunch – Speaking of flounder, we’re hoping that Chris Algieri’s embarrassing showing serves as a wake up call to some of you dreamers out there. There’s not only discussion of the piss-poor Nielsen ratings for the “Chris Algieri Show” on tap, we also have a little Lomachenko business to discuss. So, without further ado, I gave you your instructions in the dressing room; what I say you must obey – Cuidate, escucha me, toca los manos y buena suerte…Let’s get it on!

Well, Long Island, you still have that iced tea.

Let’s start off this week by saying that way too much was made about Algieri’s chances, his athleticism and other such conjecture. The facts were and remain that he is a club fighter who happened to fit a specific bill that Bob Arum was looking for.

It also just so happened that Ruslan Provodnikov had no further options with Top Rank – Freddie Roach and Manny Pacquiao were not “fooled into taking this bout”.

Roach was not at odds with the choice between being the chief second in Manny Pacquaio’s corner or Ruslan Provodnikov’s if the story unfolded that way.

That’s just an absurd notion. It wouldn’t be the first time Roach had to leave the side of one of his pupils to join another’s.

If the consensus retort about this one-sided slaughter from the Algieri supporters is something akin to “Well, it’s amazing that he went all 12 rounds”, then just know that that’s exactly what my mom said, and she doesn’t know shit about boxing, either.

You know there’s something wrong when a career junior welterweight comes in OVERWEIGHT for a 144 pound bout.

Just like I said when he (should have) lost his fight with Ruslan Provodnikov, you can not back peddle with ineffective offense and near non-existent countering skills and still win a prize fight.

Manny Pacquiao’s six official knockdowns made for great highlight reel material, but this bout was just a showcase for the Filipino.

The outcome of this one should not have been a surprise to anyone with a modicum of understanding of the sweet science.

And then there was this comical exchange between HBO’s Max Kellerman and Chris Algieri’s trainer, Tim Lane…

TL “I’m going to let him go in one more round, I still got him in the cage”

MK “The plan is to knock Pacquiao out?”

TL “Yes, but I still got him in the cage, he listens to me very well. I’m going to let him loose in another round”

By the way, Chris Algieri trying to justify that ONLY four of the six knockdowns were legit is like asking what a chair would look like if our knees bent the other way…

On a lighter note, Vasyl Lomachenko, even though paired Saturday night with an overmatched (but experienced) opponent, is an absolute pleasure to watch. The man is a serious threat to ANYONE in his weight range and will push himself into all future pound-for-pound conversations with his preternatural boxing ability.

Questions? Comments? Recipe queries? Email The Sunday Brunch team at JESSEBOXINGTRIBUNE@GMAIL.COM or tell us how we’re conspiricy theorists on Twitter @JESSEBOXING so everyone can see how ridiculous you sound now. Until next time, ciao!