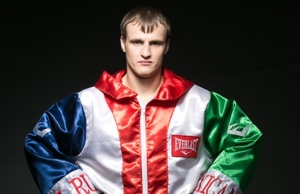 Gradovich showing good head movement as looks to catch Velez after Velez steps away from the inside. Velez is pumping his jab to keep Gradovich off of him. Gradovich is stalking Velez, trying to trap him along the ropes. Slow round as the crowd voices their disapproval of the non-action round.

Both fighters showing more activity to start round 2. Gradovich looking to get inside the taller Velez but Velez continues to pump the jab. Gradovich picking up his activity in the center of the ring. Velez is backing down as stand and trades with Gradovich. Gradovich with a nice right hand to end round 2.

Gradovich pressing the action in round 3, Velez is starting to short arm his punches as Gradovich easily counters him. Gradovich using a steady dose of hooks to body to slow down Velez. Gradovich is doubling his punch output here in round 3 as he is completely warmed up punctuating the round with a counter right hand as the bell sounds

Gradovich continues to press the action in round 4. Velez is starting to absorb some punishment from the constant pressure of Gradovich. Gradovich focusing on the body as he breaks down Velez throughout the round. Gradovich slowing taking over a competitive bout.

Velez isn’t giving in though as continues to stand in front of Gradovich and trade shots. Velez is beginning to slow down as the round goes on. Gradovich is a punching machine tonight and Velez has no answer for it.

Gradovich is wearing down Velez, his punch out is just too much for the Puerto Rican. A uppercut from Gradovich buckles Velez. Velez is still game but Gradovich continues to catch him with big shots on the inside.

Gradovich is in stalker mode as they began round 7. Gradovich’s head movement and pressure is making for a long night for Velez. Gradovich continues to put together combination on the inside. Velez is starting to push his punches as fatigue sets in. Gradovich completely breaking down Velez as the fight continues on

Velez is hanging tough as Gradovich continues his onslaught. He is surely showing heart and determination, he’s just overmatched tonight. To Gradovich’s credit, he’s been relentless all night. Trainer Robert Garcia has urged Gradovich to go for the knockout in previous rounds and Gradovich is looking to so.

Velez is still game in round 9 as Gradovich cracks him upstairs. The constant pressure of Gradovich is carrying him on my scorecard. A 3 punch combination from Gradovich staggers Velez in the center of the ring.

Gradovich is leveraging his punches in round 10. He understands he’s probably built up a lead on the scorecards and his trying to end the fight before the final bell. Another solid round for the champion, Evgeny Gradovich.

Both fighters come out swinging, the 12th round begins with excitement. Gradovich still looks and his fighting fresh. Velez weathered a storm in round 11 but is fighting valiantly in the final round. The crowd is on their feet as these 2 warriors trade punches in the center of the ring.

Robert Garcia: “There’s no way it was a draw. I felt we won every round”

Velez: “He was a very tough and awkward opponent. I had my moments”

Gradovich: “I can’t believe this”