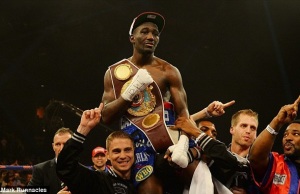 Crawford dominates in victory in front of his hometown crowd

Crawford is looking to establish jab early in the first round. Beltran is using patience as he tries to figure out a way to close the distance. Crawford continues to stick the jab in the face of Beltran as his hometown crowd comes alive with chants of CRAWFORD!!! Crawford wins a relatively close but slow round.

Beltran staying patient, keeping a safe distance while showing great head movement. Crawford has switched to southpaw to begin round 2. Both fighters stand and trade in the center of the ring, as Crawford catches Beltran with a counter uppercut. The straight left hand from Crawford is giving Beltran fits.

Crawford using a steady diet of jabs in the fourth round. Beltran is finding a home for the right hand. Beltran is closing the distance but Crawford is nailing him with the jab from the southpaw stance. It was a close and competitive round. There seems to be some swelling under the left eye of Beltran.

Beltran bringing the heat as he bull rushes his way into the chest of Crawford. Crawford counters with straight left, right hook combo. Beltran is laying into Crawford along the ropes. Round 5 is back and forth but continues to land the jab. Tough round to score but Beltran is earning the respect of Crawford’s hometown fans.

The hometown fans are trying to get Crawford fired up in round 7 as they chant his name. They’ve switched roles in round 7 as Crawford is doing the stalking. Round 7 has turned into an exciting round of action as both fighters are swapping leather.

Crawford is effective with taking the lead, Beltran is having trouble fighting backing up and side to side. Beltran corners Crawford and unleashes a 4 punch combination. Hard round to score as both fighters had their moments.

Beltran taking some chances in round 9, closing the distance and trapping Crawford in the cornea. Beltran cracks Crawford a left hook to the head. Beltran walks through an uppercut from Crawford. Beltran with a good round.

Crawford sticks Beltran with a nice jab. Crawford appears to drop Beltran but it is ruled a slip. Crawford cracks Beltran in the final moments of round 10.

Crawford is looking to close the show in the 12th and final round. Both fighters trade left hooks in the center of the ring. Beltran not giving in as he continues to bang and trade with Crawford.

Bob Arum: “Look for Crawford to return in April at the Jr. Welterweight division. We have spoken to the WBO and their on board with him fighting for their championship. Ruslan Provodnikov and Chris Algieri are possible opponents”

Beltran: ‘He is a great champion. I couldn’t handle his timing”