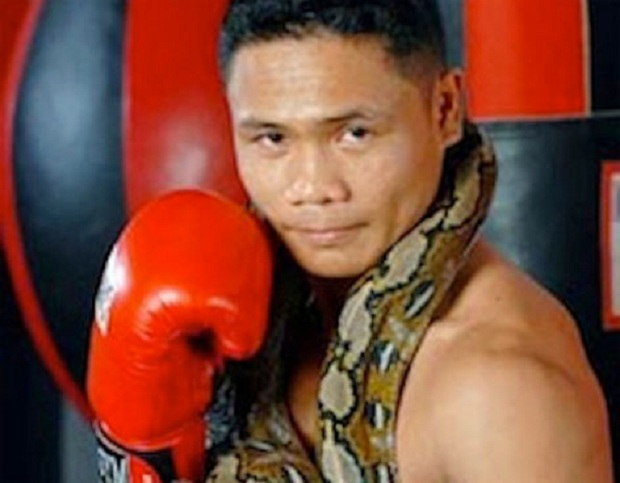 “Donnie got his nickname ‘ahas’ when he was a utility boy at the ALA Gym. One of his daily chores was to clean the snake pit with five big pythons and he was the only man with the guts to do it. He was bitten several times. But once he befriended the snakes, he was never bitten again. One day, a snake laid 11 eggs but only one survived. Donnie took care of that snake and he still does to this day. That’s how he got his nickname.”–—Tony Aldeguer, quoted from an interview.]

Donnie “Ahas” Nietes retained the World Boxing Organization junior-flyweight title by defeating the Mexican challenger Carlos “Chapito” Velarde on November 15, 2014 by a bloody technical knockout in the eighth round and improved his record to 34-1-4, but few have heard of him outside of Asia. Its all “Manny, Manny, Manny.” But this warrior from Negros Occidental, Philippines has defended his title successfully ten times since wining it by beating Pornsawan “The Tank: Porpramook (20-0) back in September 2007. Before that, “Ahas” was the.WBO Asia Pacific champion. His only loss was in Jakarta to Angky “Time Bomb” Angkotta (12-2) by SD but the “Bomb” came in six pounds over the weight limit for the fight.

Now Nietes has become the longest reigning Filipino world champion and in the process, has broken the legendary Gabriel “Flash” Elorde’s record. And unlike the great Pacquiao, the world’s only eight-division champion, his greatness derives from longevity of supremacy in one weight class. As for Elorde, he remains the most popular Filipino boxer ever, and is heralded by serious Filipino boxing fans as the best the nation has produced in or out of the ring.

In a non-tile fight against game Mexican Jesus Silvestre in 2010, Nietes was declared winner by TKO when Silvestre stopped to take a drink of water thus adding his name (and his corner) to the list bizarre boxing incidents.

Donnie has been somewhat of an equal opportunity fighter and has fought in Mexico twice, but given the inordinate number of Mexicans he has beaten, he could well be called “The Mexican Assassin.” On the flip side, his resume is conspicuous by the absence of Japanese.

Nietes says he plans to have two more fights before moving up in weight. Perhaps one might include Roman Gonzalez, but I would not bet on that one. Akira Yaegashi and Kazuto Ioka are out there, not to mention the winner of the upcoming blockbuster between Thai Amnat Ruenroeng and Chinese Zou Shiming in Macau. Fellow Pinoy Johnriel Casimero is ranked high and poses a threat as does Naoya Inque, tough Filipino Milan Melinda (32-1), and Randy Petacorin. Bottom line: Nietes has plenty to choose from to enhance his reputation.

Nietes blends power with skills., He is not without flaws but his record speaks for itself. Like A.J. Banal, Sonny Boy Juro, Denver Cuello, Rey “The Hammer” Loreto, Rey Bautista, and other gritty Pinoy warriors, Donnie Nietes comes to fight. He also is a world champion.

Here is a look at his power:
https://www.youtube.com/watch?v=QkMoIsHTSb0

Here is a look at his most recent duke:
https://www.youtube.com/watch?v=lClzhr7AjU0