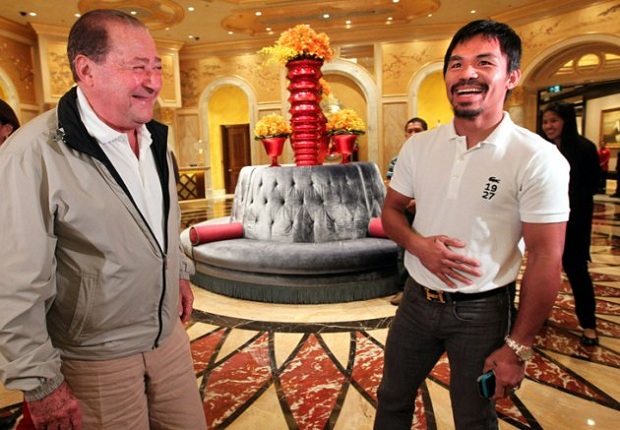 Rumors of Mayweather-Pacquiao have again emerged, along with yet another round of “leaks” regarding high-end negotiations, alleged demands from Mayweather, and a host of mysterious foreign investors looking to dump bags of loot at the feet of everyone involved. Traced back to their source, though, all of these “leaks” have come from Bob Arum and Team Pacquiao.

Showtime Executive Vice President and General Manager of Showtime Sports, Stephen Espinoza, has now issued a public ‘yeah, right’ to these claims (But Arum has insisted that these talks are so super secret that even Espinoza either doesn’t know about them or has been instructed to say nothing about them).

Mayweather, meanwhile, hasn’t even cared enough to respond to this latest wave of one-sided media manipulation, instead posting a video montage via social media of Pacquiao getting knocked out and this gem.

Who knows? Maybe this time, the negotiations talk is for real. But all of this is hard to take seriously when we’ve been hustled with the exact same routine several times before and, especially, when all the buzz has been coming from one side of the table while the other side is posting “booty shaking” videos.

Most likely, all of this Mayweather-Pacquiao talk is a smokescreen from Arum and company to distract from the cynicism of promoting a Pacquiao-Algieri mismatch as a PPV main event and then to distract from the low, low numbers the Macau craptacular actually generated. If everyone’s biting on Mayweather-Pacquiao, they might forget that one of Pacquiao’s last few performances was wasted on a club fighter and part-time nutritionist.

But there may be something even deeper and more insidious involved in this latest round of fake Mayweather fight talks. Could Arum be looking to drive the final nail into the Mayweather-Pacquiao coffin?

But why would he want to kill the biggest money fight out there for his guy and a chance to represent one-half of the biggest boxing event of all-time?

Back when it was first announced that the Asian gaming capital of Macau wanted to bring world class boxing to their mega-casinos, the clueless boxing media applauded the globalization of boxing and the opening of the Chinese market.

To me, bringing boxing into the black hole of a mostly unregulated, tax haven, free port like Macau was the equivalent of moving a rub & tug Jersey massage parlor to the seediest corner of the Bangkok red light district.

No real good could come from planting boxing’s tangled, thorny roots into the vice-fertile soil of Macau.

With virtually no regulation and little taxation, business transactions in Macau are untraceable by anyone other than those involved. This makes Macau a magnet for wealthy investors looking for tax protection as well as shady characters looking to keep their business dealings away from prying eyes.

With this in mind, we introduce the sport of boxing– a sport already chin-deep in graft and varying shades of ethical gray, even in the comparatively regulation-obsessed West.

So much of the sport of boxing already exists in the shadows, buried deep in the management model its power brokers have created to circumvent any sort of reasonable government regulation. The last thing the sport needs is a Dead Zone where even the pretense of regulation is completely absent.

Part of my concern was also that Macau could cost the Americas and Europe a number of high profile fighters, who may gamble on becoming well-paid casino attractions in low-risk bouts for the amusement of the high rollers and newbie Chinese fight fans.

However, so far, only Manny Pacquiao has found himself lured over to the “Sin City of the Far East” as a real main eventer. And as things look to be working out well for all of Team Pacquiao in Macau, the temptation is to keep him there and grow fat from the easy money.

A move to the boxing-hungry Asian market would allow him to do as he pleases in terms of matchmaking and pretty much call all of his own shots. The decision could, literally, add years to his career. And if Manny loses a good chunk of his American market share, so be it. He will be taking home the same amount of money, if not more, as a Macau house fighter.

Like Elvis being brought to Vegas to sing his greatest hits to tourists while growing fat and jaded, expect something similar from Pacquiao, as opponents are hustled in and hustled out so that Manny can entertain the casino high rollers. The beauty of the deal is that he’ll be able to fight almost anybody and under any conditions. Who’s going to do something about it?

In the real world, the market will eventually punish fighters who make a habit out of charging big bucks for crappy fights. In the new Asian boxing market, there are literally billions of possible new fans who have never been exposed to the sport.

In terms of business, alone, a move to Macau should be pretty much a no-brainer for Arum and  Team Pacquiao. Eliminating the sporting aspect of boxing, a fighter like Pacquiao could be propped up for years, making big money for low-risk fights against no-hopers. This would be especially beneficial in today’s political environment where just about every real, viable challenge to Manny requires Arum to sit across the table from hated business rival Al Haymon.

Except, by all indications, Pacquiao is a born fighter, a sportsman and actually wants the challenges. Chief among those challenges would be Floyd Mayweather, whose head on a platter would be, by far, the crowning glory of an already glorious career.

For Arum and the rest of Team Pacquiao, though, fighting Mayweather is a blind rolling of the dice where a career-high one-time payout comes attached to a greater than 50% chance of walking away with an embarrassing loss and permanent runner-up status. Pacquiao could keep fighting after a Mayweather loss, but smaller paydays and less saleability would follow the fighter who gained so much of his fan support from being the anti-mayweather– the all-action, “good guy” yin to Mayweather’s “Money” yang.

So, ideally, it would be good for the Pacquiao business to forever be the yin to Mayweather’s yang, forever hounding his nemesis, supported by the applause of the fans. More important, as the fighter forever in pursuit,  his team would be able to deflect criticisms for future matchmaking decisions– “Hey, we want to fight Mayweather, but since he’s scared…”

And that takes us back to the beginning.

What better way to convince Manny and the world that Mayweather is hopelessly afraid than by one final barrage of fake news leaks and phony negotiations aimed to go nowhere?

Pacquiao already has one foot out the American door as a once-a-year Vegas fighter. It might not be so hard to convince him to leave the U.S. behind completely in favor of a work base less than three hours by plane from his home in a territory that will not siphon off more than a third of his purse via taxes. And if he’s convinced that Mayweather will just be forever afraid (as his team could lead him to believe), there’s really no reason to stick around, anyway.

As for Arum, if the $20 million site fees from Macau keep rolling in, it doesn’t matter one bit what America thinks of the product being offered to them. As with this recent Pacquiao-Algieri PPV, any Pacquiao event coming from Macau has already turned a profit before the American PPV numbers even get tallied. By pulling away from the more discernible, knowledgeable Western fan in favor of the Pacquiao-curious Macau high roller and interested Chinese newbie, matchmaking no longer becomes an issue. Jessie Vargas, Mike Alvarado, and just about anyone else would be good enough for a Pacquiao B-side. And, best of all, this can go on for almost as long as Team Pacquiao likes.

Obviously this is conjecture on my part. We don’t really know that Arum is trying to once and for all kill THE mega-fight, but it’s certainly safe to assume, based off of 5+ years of identical BS tactics and a career of similar stunts from the shrewder than shrewd Arum, that these (likely) fake stories leaked to the media are not designed to encourage the making of the bout.

Used as a smokescreen/safety blanket for Pacquiao while delivering public relations jabs at Mayweather, the BS is designed to paint the good vs. evil narrative and to rattle Mayweather’s cage. And when Mayweather responds out of anger– which he always eventually does– it will create the impression in way too many dimly-lit minds that, yeah, there were talks and that Mayweather walked away from them.

The reality would be, though, that nobody was doing any real negotiating, Mayweather’s team was never even brought into the picture, and Arum’s “Plan B” opponent was slated as his “Plan A” all along. We know this from experience and from actually paying attention these last several years. It’s really not that hard to figure out. On the two occasions where there was direct contact between the two sides, Team Pacquiao walked away both times. Other talks of negotiations have featured  Arum, admittedly, talking to empty chairs and issuing bogus deadlines for signing contracts that were never even drafted.

At the end of the day, though, fans will believe what they want to believe and the media will always err on the side of cage-rattling click-bait– two reasons Arum has been allowed to steer the Mayweather-Pacquiao discourse away from the possibility of a reasonable compromise.

If this all turns out to be true and this time, real talks are actually going on, I will be the happiest man alive to offer an apology. But don’t count on that apology coming anytime soon.

You can email your death threats and fake job offers to Paul at paulmagno@theboxingtribune.com . Paul is a full member of the Burger King Kids’ Club, a born iconoclast, and an ordained minister in the Universal Life Church.