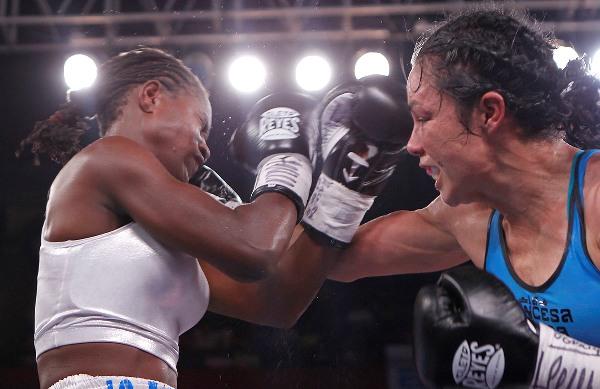 In her third bout of the year, “La Princesa Azteca” Jackie Nava (31-4-3, 13 KO’s) successfully defended the WBC and WBA super bantamweight titles in Sonora, Mexico. Nava dealt the first career defeat to Sayda Mosquera (7-1-1, 5 KO’s), who went up in weight for the contest and is the current WBC Latino bantamweight title-holder.

It was a highly entertaining fight, with the action shifting back and forth throughout. The challenger fought behind a long jab, using her height and reach advantage in an attempt to keep Nava off balance and at a safe distance. Nava however, landed the harder punches and cleaner scoring combinations, repeatedly snapping Mosquera’s head back with the overhand right. Neither fighter let up over the course of the 10 round bout, and with exception of a moment in the final frame where a low blow dealt by the champion caused a halt in the action, there wasn’t a dull moment in the contest.

Final scores came in at 97-93 twice and 98-92 all in favor of Jackie Nava, who retained the WBA and WBC belts and won the WBA “super” super bantamweight title. Unofficial scoring by Azteca had the final score even at 95-95.

Mucino is the former holder of the IBF and WBA flyweight titles, and sports an impressive list of opponents in her seven-year career, having faced the likes of Susi Kentikian, Ava Knight, Mariana Juarez, and Melissa McMorrow. In 2012 she briefly held the interim WBA flyweight belt, but hadn’t been a full champion since losing the IBF title to Ava Knight in 2011. Following a 2012 loss to Mariana Juarez, she racked up five wins and a draw with Jessica Chavez.

At the L.B. Scott Sports Auditorium in Philipsburg, Sint Maarten, New York heavyweight Sonya Lamonakis (10-1-2, 1 KO) won her first world championship, taking a 10 round decision over Carlette Ewell (15-8-1, 9 KO’s). This was the second time the two have faced off after fighting to a six round draw nearly three years ago. Ewell hadn’t fought since then, but Lamonakis had picked up three wins, a loss and a draw and also won the New York State heavyweight title.

A school teacher by day, the 40 year old Lamonakis, aka “The Scholar”, has been seen numerous times on Lou DiBella’s Broadway Boxing cards where her exciting style has made her one of the fan favorites. This was her first time fighting outside the United States. Ewell had a brief run as the WIBA and WIBC light heavyweight champion, but has only fought four times since 2008.

In Vienna, Austria, Nicole Wesner (9-0, 4 KO’s) remained undefeated and claimed the vacant WIBF and WBF lightweight titles, making short work of Gina Chamie (11-2, 5 KO’s), stopping the world title challenger in three rounds. After being dropped by a body shot in what would be the final frame, Chamie beat the count but was dropped a second time and counted out with two seconds left in the round. Both fighters are newcomers to the pro ranks; Wesner had her first bout two years ago and Chamie has been a pro for just over a year and a half.

Heather Hardy (12-0, 2 KO’s) remained undefeated, winning an eight round decision over Elizabeth Anderson (3-6) at BB King Blues Club and Grill in New York City. It was a non-title bout for Hardy, who won the WBC International super bantamweight title in her prior contest and also holds the UBF title in the same weight class.

Jelena Mrdjenovich (34-9-1, 18 KO’s) defeated Pasa Malagic (8-3, 2 KO’s) in Edmonton, Alberta, Canada by third round TKO. It was a non-title contest for the WBC world featherweight champ, her fourth since winning the title from Melissa Hernandez in May of 2013. Her one defense was a six round stoppage over Marilyn Hernandez in September. The world champ has also held world titles in the super featherweight and lightweight divisions.

WIBF bantamweight champ Hee-Jung Yuh (14-2, 5 KO’s) stopped Rathsada Sor Worasin (0-3) in the seventh round of a non-title contest in Thailand.