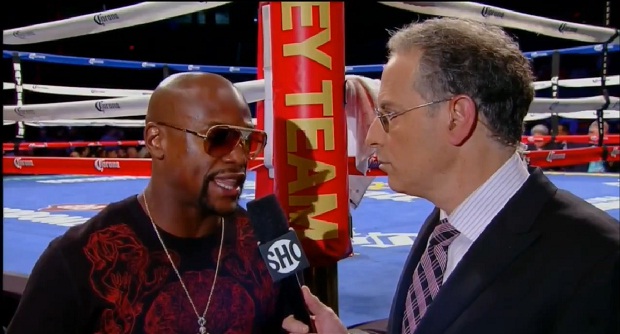 Friday night, on a live telecast of Showtime Championship Boxing, pound for pound king Floyd Mayweather called out chief rival Manny Pacquiao, during a ringside interview with Steve Farhood. Although Mayweather has professed his desire to fight Pacquiao in the past, this was his most emphatic statement to date.

“Floyd Mayweather isn’t ducking or dodging any opponent, Bob Arum is stopping the fight,” said Mayweather. “We’ve been trying to make this fight happen behind the scenes for years now, but the fans and people have been fooled, because they’ve been listening to people on one side, now it’s time for us to talk. We want the fight, we’re ready.”

Farhood then asked Floyd what would be his motivation for taking the fight, whether it be for the fans, money, or Legacy.

“A little bit of everything, because I know that he’s [Pacquiao] not on my level,” Mayweather replied. “The fans would love to see the fight, and of course I want to go out with a bang, so let’s make this fight happen.”

The Michigan native then looked directly into the camera, and once again turned his attention to Pacquiao and Arum.

Although Farhood stated that a new round of negotiations haa begun, which Mayweather didn’t deny, the 37-year-old did throw in some words that prove the fight is far from being made. He insisted on having the bout air on Showtime PPV, a major sticking point, because Pacquiao has a contract with HBO. Mayweather also pointed out that since their previous attempt at negotiating, the Filipino has produced subpar PPV numbers and lost two fights, therefor he will not be getting the 40 million dollar purse that was offered during their now infamous phone call in 2012.

Negotiating In public is never a good thing, but Mayweather’s statement adds to the already feverish hype and resurgence of a potential mega fight that seemed dead in the water just a year ago.