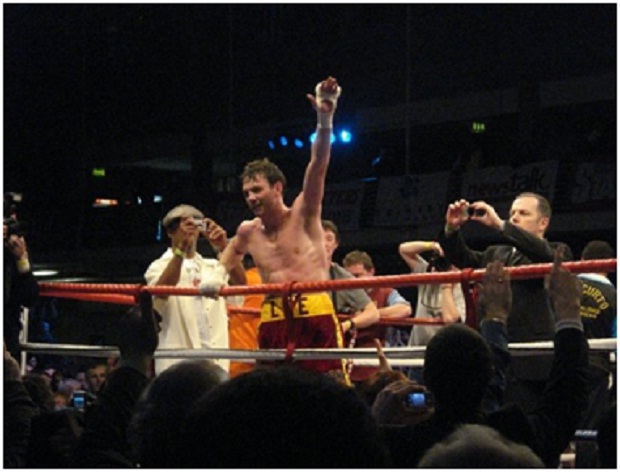 “I got there before he did” —Andy Lee

Limerick native “Irish” Andy Lee virtually repeated his dramatic and sudden stoppage of John Jackson (18-0) by using his malefic right cross to stun two-time World amateur champion Matt Korobov (24-0 coming in) and then was on him like something from the Discovery Channel, launching almost 20 unanswered punches before referee Kenny Bayless put a halt to the shocking and sudden ambush.. Andy, who should change his moniker to “Sudden Lightning,” thus becomes the new WBO World middleweight champion as he won his sixth outing in a row.

Speaking after the bout the refreshingly honest and affable Andy, who is now mandated to defend against Billy Joe Saunders, said he wants to make a defense in Ireland and paid homage to current trainer Adam Booth and gave a heart-felt thanks to his late mentor and trainer Emanuel Steward, and dedicated this title victory to the entire Steward family.

In a night when a gifted boxer by the name of Mauricio Herrera was appallingly robbed in plain sight for the second time this year, and when some strange scoring resulted in a draw between Diego Chavez and Timothy Bradley, Andy Lee brought his own judges to the fight and took it out of the hands of the consistently awful Las Vegas Judges.