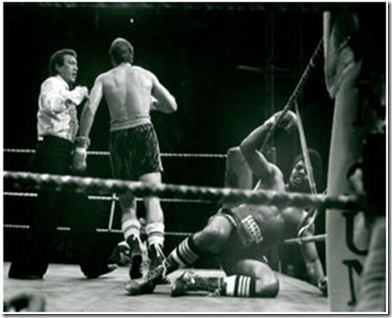 … Outside a boxing ring, he [Coetzee] is a gentle man, a white man liked by his black countrymen. Blacks have spoken out on his behalf in the Transvaal Post because he has “denounced racialism…John Underwood (DOWN & OUT IN MONACO), June2, 1979

Leon Spinks was coming off a loss to Ali in their 1978 rematch in the Superdome in New Orleans but was still slightly favored to beat undefeated South African Gerrie Coetzee (21-0) in Monaco on June 24, 1979.

Coetzee had beaten the likes of Pier Fourie,  highly rated Kallie Knotze, Ron Stander, Johnny Boudreaux, and Ibar Arrington, but had done all of his work in South Africa and was a relatively unknown quantity if not slightly suspect. However, he possessed a heavy right (known as the Bionic Hand) and extremely fast hands for a heavyweight. Team Spinks may have badly underestimated him. Indeed, the gentle and well –liked Coetzee was the veteran of 192 amateur bouts, having won 180 of them by knockouts.

“Neon Leon “Spinks came out and attacked early and played the role of mugger as the South African withstood the aggressive attack and answered back with some shots of his own. Then, Gerrie landed a left hook to the body that had Spinks wincing in pain. After a missed Spinks uppercut from too far away, Gerrie caught Leon with a heavy right hand behind the ear that sent him to the canvas face-first at the 1:19 mark. The mugging was on..Leon got to his feet at the count of three despite being on Queer Street and attempted to hold as Coetzee, sensing the kill, came forward throwing vicious right hands. Still another right sent Spinks down for the second time at 1:38. He again was up quickly—too quickly—and was allowed to continue. Coetzee landed three consecutive bionic driven power punches that sent Spinks stumbling forward across the ring, sprawled onto the ropes, and down for the third and final time. The mugging was over. It took just 2:03 in round one. While “Neon Leon” would be quickly brutalized several more times in his career, this fast assault marked the first knockout loss of his on again-off again professional career.

After two failed attempts at the title, Coetzee would knock out Dokes in the tenth round in 1983 to become South Africa’s first world Heavyweight title holder.