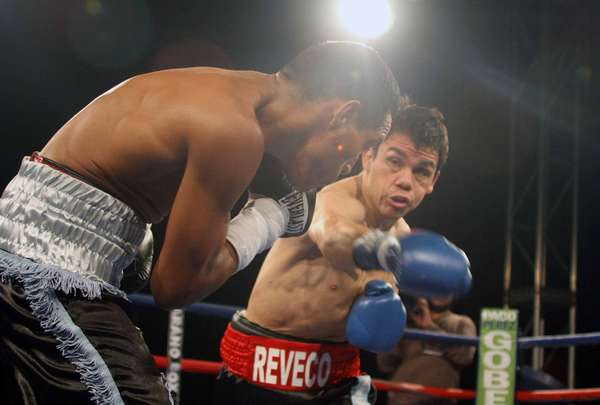 12/19 – Juan Carlos Reveco (34-1, 18 KO’s) vs. Yodmongkol Vor Saengthep (34-2, 20 KO’s) – Polideportivo Gustavo Toro Rodriguez, San Martin, Mendoza, Argentina
Reveco defends the WBA flyweight title for the eighth time (four were as the interim title holder). He’s also a former two-time light flyweight world champion and has won his last 17 contests. His one loss came in 2007 to Brahim Asloum. Vor Saengthep holds the interim WBA belt, which he has defended on one occasion. He was a long reigning WBC Youth World light flyweight titleholder and comes in on a 28 fight-winning streak.

12/19 – Suriyan Sor Rungvisai (38-6-1, 17 KO’s) vs. Tony Arema (3-6) – Kinpoo Seafood Restaurant, Samut Prakan, Thailand
Sor Rungvisai had a brief run as the WBC super flyweight champ in 2011. After losing the belt to Yota Sato, He moved up to the bantamweight division where he won the WBC Aisan Boxing Council title and defends that belt for the sixth time against Arema. He comes in off a 12 round decision loss to Shinsuke Yamanaka in a bid for the WBC world bantamweight title. Not much to say about Arema, who’s fighting for the ninth time in his nine-year career.
*Sor Rungvisia won via KO 1

12/20 – Daud Yordan (32-3, 23 KO’s) vs. Ronald Pontillas (17-6-3, 8 KO’s) – Pangsuma Stadium, Pontianak, Indonesia
These two face off for the interim WBO Asia Pacific lightweight title. Yordan is the current IBO lightweight champ and former IBO featherweight titleholder, but hasn’t fought in a year. Pontillas is a former regional titleholder who comes in off two wins.

12/20 – Bryan Vasquez (33-1, 17 KO’s) vs. Sergio Thompson (30-3, 26 KO’s) – Arena Quequi, Cancun, Quintana Roo, Mexico
This is the fourth defense of the interim WBA World super featherweight title for Vasquez, who won the title back in 2011 and lost a bid for the “regular” WBA title when he was stopped in eight rounds by Takashi Uchiyama two years ago. Thompson comes in on a three fight-winning streak and as the WBC International lightweight titleholder. Last year he lost a decision to Takashi Miura for the WBC super featherweight belt.

12/20 – Ricardo Mayorga (30-8-1, 24 KO’s) vs. Andrik Saralegui (7-1, 5 KO’s) – Puerto Salvador Allende, Managua, Nicaragua
Mayorga, a former two-division world champion, has literally alternated wins and losses since taking back-to-back wins over Vernon Forrest in 2003. “El Matador” has gone 5-5 over the last 11 years, and has fought just once since a 12th round knockout loss to Miguel Cotto in 2011. His opponent has been a pro for over 15 years, and has fought just once since 2006.

12/20 – Roman Martinez (27-2-2, 16 KO’s) vs. TBA – El San Juan Resort and Casino, Carolina, Puerto Rico
The former two-time WBO super featherweight champion looks to rebound from a 2013 loss to Mikey Garcia. His opponent is yet to be named.

12/20 – Andy Ruiz Jr. (23-0, 17 KO’s) vs. Siarhei Liakhovich (26-6, 16 KO’s) – Celebrity Theater, Phoenix, Arizona, USA
Undefeated heavyweight prospect Ruiz comes in having stopped his last nine opponents, and holds both the WBO Inter-Continental and NABF heavyweight titles. His opponents include fellow prospects Tor Hamer, Joe Hanks, and Elijah McCall, son of former heavyweight champ Oliver McCall. Liakhovich had a WBO world title run that lasted one fight; after beating Lamon Brewster for the title, he was ahead on the scorecards when Shannon Briggs stopped him with one second remaining in their fight. He hasn’t beaten anyone remotely relevant since, and lost three consecutive bouts before winning an eight round bout in February over a 5-11 opponent.