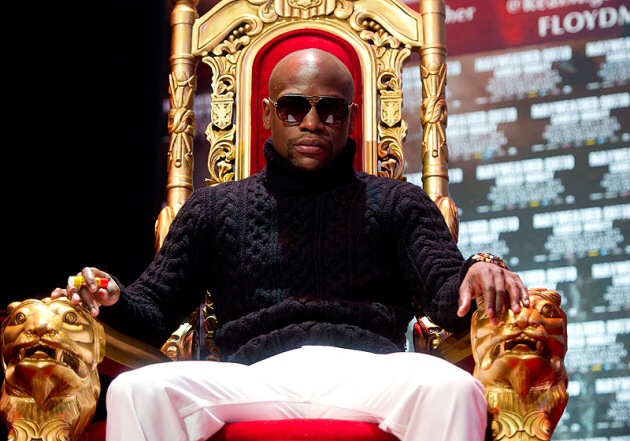 Roll out the red carpet.  Have DJ Jay Bling set up shop. Alert the media, newspaper and radio afar.  Set up the stage, place the podium center stage and take a seat.  The greatest athlete of our Generation is retiring.

Floyd Mayweather Jr. is entering the 19th year of his illustrious career. Floyd Mayweather Jr. plans to call it a day at the end of 2015.  It’s a career that’s spanned 3 decades, saw 3 presidents and survived an economic crash.  Yet, Mayweather was to able market himself into becoming one of highest paid athletes in the history of sports.  And he did in a fashion no other athlete outside of professional wrestling would; he went all villain on us.

He turned a boxing event into a sporting event, rivaling the likes of a Kentucky Derby or the Super Bowl.  He turned an average promotion into realty TV, changing the game with24/7 and All-Access.  In the process, he learned one thing, the more they hate you, the more you make.  So in between breaking PPV records and cashing 10 figure checks, he buckled the Big Show and participated on “Dancing With The Stars”.  He did all this while building the biggest one man show we’ve seen since his “Airness”.

And when the dust settled, the stars aligned and the cosmic powers-that-be came together, a star was born.

It all started on October 11, 1996 at the Texas Station Casino in Las Vegas, NV.  He would stop Roberto Apodoca in the 2nd round, dropping his foe with a body shot.  It was the beginning of what would be a 2 year march towards his first World Championship in the Super Featherweight division.   On October 3rd, 1998, with 17 victories, 15 by stoppage, Mayweather would face 40-fight champion, Genaro Hernandez.  It was a brilliant, one sided performance for the destined to be icon, picking up the WBC Super Featherweight Title. On a side note, Hernandez would pass away in 2011.  To help and remember his foe, Mayweather covered all funeral expenses for the Hernandez family.

Since that glorious day in October of ’96, Mayweather has built the one of the most luxurious and successful careers of any athlete, ever, period.

However, it isn’t just about the belts, the accomplishments were just as great.  Mayweather Is perceived as the best, pound-for-pound fighter of his generation.  He was the consensus fighter of the decade between 2000-09.  Yet beyond the accolades and bank accounts, it’s the way he transcended the portrait of a boxer.

He took Ali’s brash attitude and mixed it with Tyson’s celebrity.  He took the behind the scenes life of a fighter and brought to the bright lights of cable TV.  He sat court side at NBA games in seats that were usually reserved for actors.  He hosted club parties that were usually reserved for rappers.  And most recently, he made a cameo in a big budget film, a role usually reserved for other athletes.  Yet he did in a fashion no other athlete has done before him, on his own.  Sure, he has team behind him as well as a notorious manager, yet at the end of the day, he calls the shots.  Even Jordan had Nike.

As Mayweather prepares to call it a day, we’re left to ponder, have we seen boxing last iconic fighter?  The signs say yes as no fighter in today’s game possess all abilities it will take.  It takes more than knockouts to crossover, more than speed to be a superstar.  A pretty face can only take you so far, natural abilities are usually exposed.

Mayweather went from a fighter to a businessman; he’ll leave the game as a mogul.  You don’t have to like him as a person, but there’s no way you cannot respect him as a fighter.

As the farewell tour begins, wrap the gifts and prepare the speeches, we’re in the final stages of greatness.