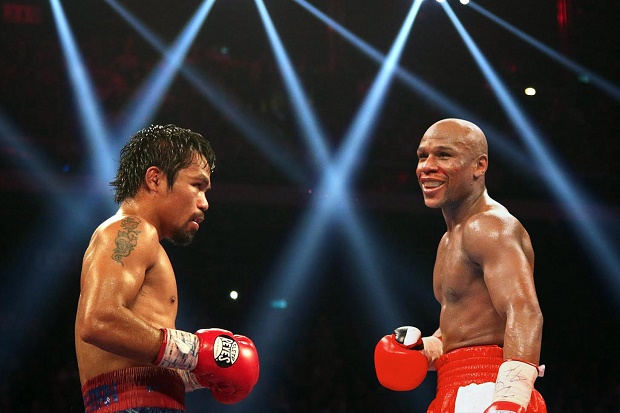 Hola familia y amigos, welcome to another star-spangled, AR-15 shootin’ edition of USA’s most four-wheeling, most meat-eating weekly proper pugilistic paper, The Sunday Brunch – We are the Rick Grimes of boxing columns. This week we’re asking the big questions, we want to know who, exactly is to blame for “the fight” not happening despite posturing from both sides. We’ve combed the internet and delved into the deep web to find clues and we’re hot on the trail of one particular scumbag…Hold on to your halo-halo and crack open a fresh balut, we’re about to give someone a big-time colonoscopy…With that being said, I gave you your instructions in the dressing room; what I say you must obey – Cuidate, escucha me, toca los manos y buena suerte…Let’s get it on!

Enter the fight that everyone wants to see, but no one can seem to organize. It will be billed as bigger than Ali – Frazier…More explosive than Hagler – Hearns and more money-spinning than De La Hoya – Mayweather.

Floyd Mayweather versus Manny Pacquiao – Two pound-for-pound champions that were in their respective primes, both on top of the world, both seemingly on a collision course…So, what gives?

Back in 2009, Manny pacquiao had just stopped the insanely popular Miguel Cotto…In fact, the Filipino fireball had either knocked out or halted 10 of his last 15 opponents. Floyd Mayweather, who had established himself as the heir apparent to Oscar De La Hoya’s PPV crown, had just come off of a 21 month “retirement” – supposedly because he had become disenchanted with the sport – to dominate and completely shut-out the then number two pound-for-pound fighter in the world, Juan Manuel Marquez.

Around that time, negotiations for the mega-fight were reportedly underway with Manny Pacquiao opening up in Las Vegas casinos as a 8-5 favorite (today, sportsbooks have Pacquiao listed as a -350 – +250 underdog).

According to Wikipedia, the original 2009 contract proposed a 50-50 split of revenue, as well as having Pacquiao walk to the ring and step on the scale first. Other nuances of the 8-page paper included billing nomenclature, pay-per-view cost and an inclusion of Olympic-style drug testing.

Several venues were discussed including a laughable outdoor stadium proposed to be erected by Manny Pacquiao’s promoter, Bob Arum.

Days later, GBP released a press release stating that Manny Pacquiao was indeed unwilling to comply with Mayweather’s requests for the “Olympic-style drug testing”, and that the fight was off.

Bob Arum went to his press corps the very next day with this message: “We appeased Mayweather by agreeing to a urine analysis (a test which is unable to find modern EPO and HGH performance enhancers) and blood testing before the press conference and after the fight. Mayweather pressed for blood testing even up to the weigh-in. He knew that Manny gets freaked out when his blood gets taken and feels that it weakens him. This is just harassment and, to me, just signaled that he didn’t want the fight”.

Other blurbs came out in the subsequent days and months including statements that Manny Pacquiao is “scared of needles”.

Top Rank even attempted to negotiate the cut-off days for the “random” testing. They proposed that they were willing to submit only to three tests and the closest one to the actual fight (aside from the post-fight test) was 30 full days ahead of the bout. Anyone with a modicum of knowledge of cycling performance enhancing drugs out of a body’s system would tell you that this sends up immediate red flags.

“Let’s be very clear on the real issues we differ on. It’s not about being tested, it’s about who does the testing and the scheduling of the procedures. The major issue related to the testing rests with which independent agency will administer these tests. The USADA (United States Anti-Doping Agency) can not do it because they will not amend its procedures to accommodate the blood testing schedule we have outlined.” – Bob Arum

That’s right. They didn’t want to use the USADA because they won’t change their random blood testing procedures to fit Top Rank’s manufactured scheduling.

If that doesn’t tell you something odd is going on then perhaps you should quit reading now.

Fast forward a few more months and both sides had agreed to some mediation in hopes to negotiate the blood testing problem. A bit more public posturing from both sides and Bob Arum declared that the fight was officially off, citing that Mayweather would not bend to a 24-day cut-off date for the blood testing…

Why would you need a cut-off date for blood testing?

Later in that same month, Floyd Mayweather’s team announced that he (Mayweather) and every future opponent of his will be subject to that same random blood testing he requested of Team Pacquiao.

Other attempts at negotiations for the mega-money match-up were on the table over the next few years, including a reported offer from Mayweather of 40 million dollars that was flatly refused by Pacquiao’s handlers (a story which was later quasi-verified by Manny Pacquiao’s long-time strength and conditioning coach, Alex Ariza).

In 2011, Manny Pacquiao’s team allegedly agreed to the random drug testing…just not in the United States…Only in the Philippines…And only with a “neutral” testing agency.

Keep in mind that Pacquiao has had almost no control over his career. His handler Michael Koncz and promoter, Bob Arum have even famously conspired to hide details of a third party firm who investigated the fighter’s (missing) finances.

Recently, Fighthype.com released an article outlining some other interesting points. Manny Pacquiao’s long-time confidant and Chief of Staff for the Congressman, Franklin Gacal contacted the website stating that he’s “In Vegas from the 30th-Jan 3rd and would love a chance to sit with [Mayweather] and bring the truth back to [Pacquiao], so [Pacquiao] will know it has been Koncz and Bob (Arum) blocking all along…”

The lawyer would go on to say “If that is his condition and if Manny agrees and it looks like Manny will agree to fight Floyd, the only way is no renewal of any contract with Bob Arum. Manny should be a freelancer for the fight to be set. History is waiting and Bob should free Manny. That would be Bob’s greatest contribution to boxing history.”

In other words. in order for the fight of the centuray to be arranged, Bob Arum needs to Free Manny Pacquiao from his bonds.

It’s the only way.

Thanks for joining us this week, we’ll be back next Sunday with another set of randomly configured catch phrases, dangling participles and run-on sentences. We’ll have tips, tricks and codes for the Nintendo Entertainment System™ and Walking Dead spoilers. Questions about why my recipe section is in hiatus or whether or not we will be publishing a “who has the bigger head” piece this fall can be directed to JESSEBOXINGTRIBUNE@GMAIL.COM…Call me a Manny Pacquiao hater on Twitter @JESSEBOXING or send me defamatory remarks on Facebook after you “friend me” at JESSE IAN LARDIES. Until next time, sante.