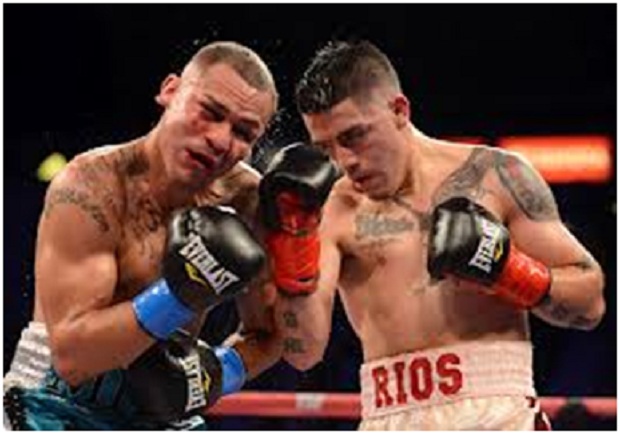 “I know for a fact this fight is a do-or-die fight for me…We’re cool with each other, but we know which kind of fight we’re going to give each other. I come to hurt. I hurt to kill. When I smell blood you better be damn straight I’m going to be right in front of you hitting. When I get hit what I’m thinking about is ‘Mother [expletive] you tagged me. Now it’s time to tag you back.’”—Brandon “Bam Bam” Rios

“They caught him with possession of a weapon. Who doesn’t have a gun in the car? Just a little thing that happened”—Rios

“This is a trilogy fans will remember for a very long time. We are entertainers and our fight on January 24 will be the grand finale. I intend to start the fireworks early in the fight.”—Mike “Mile High” Alvarado

Former WBA lightweight champion Rios (32-2-1, 23 KOs) sees his fight against former WBO junior welterweight champion Mike Alvarado (34-3, 23 KOs) this month as a do-or-die fight for him when the two meet up on January 24 in Bloomfield, Colorado, USA. Rios has recent losses to Manny Pacquiao and Alvarado and a DQ win over Diego Chaves.

Alvarado has been in a string of brutal wars against high level opposition in which he has gone 3-3. These battles were against Juan Manuel Marquez, Ruslan Provodnikov, Rios (twice), Mauricio Herrera, and Breidis Prescott. They occurred between 2011 and2014 and involved sixty-one gut-crunching, draining rounds.

Mike’s lifestyle has often gotten in his way. In the latest episode, police arrested the 34-year-old Alvarado on Jan. 3 after they found a handgun in the glove compartment of his Hummer. As a convicted felon, the boxer cannot legally possess a firearm.

Here are two tough hombres with similar records and similar career. They split the first two fights in their series — a Rios seventh-round TKO in 2012 that was named Fight of the Year by Sports Illustrated; followed by an Alvarado UD victory in 2013 that won him the WBO junior welterweight world title.

Now, the winner moves on; the loser moves aside. The winner is looking at a big paycheck while the loser could be winding down his career and/or fading to veteran status. That’s what a crossroads fight is all about and this one is a quintessential one.