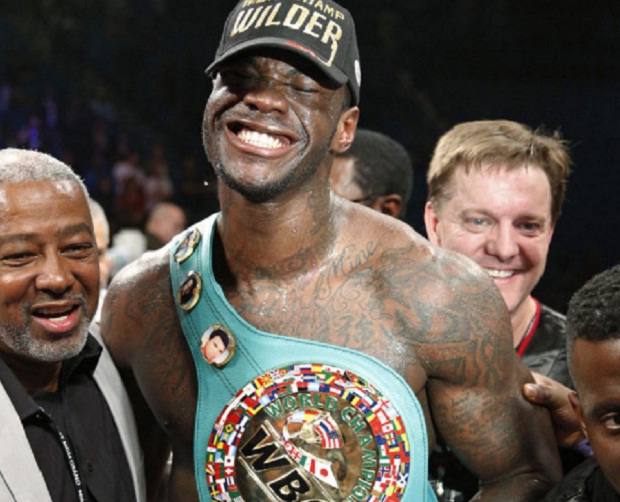 MGM Grand, Las Vegas, Nevada– It wasn’t the one-round, do-or-die throw-down that many expected, but for the sake of the sport there was a clear and decisive winner, sans controversy, and several questions may have been answered along the way. Oh, and yeah, there’s finally an American heavyweight worth a proper headline.

Wilder boxed from the outside for most of the fight, needing little more than a long stride and a one-two to keep Stiverne from launching any sort of sustained offensive attack. The defending champ was definitely coming forward, but only for for a rare occasion here and there, he was unable to put any real pressure on the challenger.

Except for a second round dual trip to the canvas following a Wilder shot that wobbled Stiverne into a waist tackle and some stiff-legged fumbling after Stiverne was hurt by a series of shots in the seventh, neither fighter was ever in any real danger of being stopped.

By the eighth round, the fight settled into the familiar pattern of Wilder scoring from the outside and Stiverne content to follow. Although Stiverne would occasionally surprise with a mean-spirited hook, those moments came way too infrequently and came fewer as the fight progressed.

It would be unfair to withhold praise from Wilder because of Stiverne’s poor performance, but the truth is that as the fight progressed it became clearer and clearer that Stiverne was not the fighter upon whose shoulders “ultimate test” can ever be written.

But Wilder did stand up to a hard, hard punch, he did prove that he could go a full twelve, and he did not collapse under the immense pressure put before him. The question of whether Deontay Wilder is “for real” may have to wait a bit longer. However, for right now, he’s real enough to be WBC Champion and legit enough to silence a good number of critics.

On the televised undercard, Leo Santa Cruz (29-0-1, 17 KOs) made the fourth defense of his WBC junior featherweight title via eighth round TKO over game, but ultimately overmatched Jesus Ruiz (33-6-5, 22 KOs).

The 26-year-old rising star has established himself as one of the pound for pound best offensive fighters in the game, but the added attention and some recent soft touches are making it painfully clear that Santa Cruz has to step up the level of his opposition. Realistically, his level of opposition is not all that far behind (if behind at all) that of his fellow division champs, but the spotlight of being a frequently featured Showtime talent earning very large purses ($750K in each of his last two fights) has amped up expectations from media and fans.