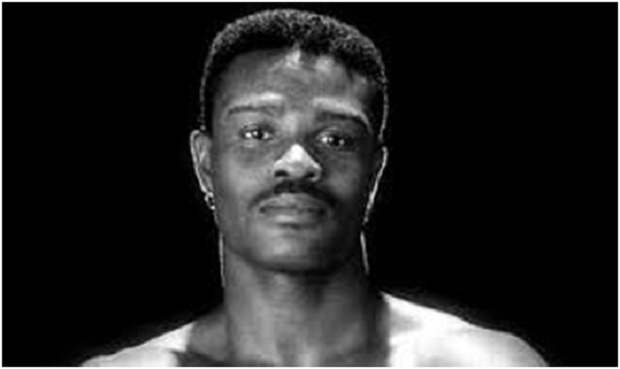 “I knock him out.”-John Mugabi

On March 17, 1985, mugger extraordinaire John “The Beast” Mugabi, , moved to 25-0 with all 25 wins coming by way of KO. His victim on that date was another KO artist by the name of Earl Hargrove (26-1 with all but one of his wins coming within the distance). This was a free-swinging affair until the Beast connected and then the affair ended abruptly with no Dear John letter. Hargrove had been exposed while the Ugandan-born bomber Beast sought new prey.

Managed by Mickey Duff early on, the popular and fan-friendly Mugabi was part of an exceptionally talented early 1980s’ junior middleweight and middleweight division and he destroyed most of them. Then, after losing to Marvelous Marvin Hagler in a classic war and to Duane Thomas from a thumb to the eye, the tough Mugabi came back and reeled off eleven straight stoppage wins before tangling with future Hall of Famer and three-time world champion “Terrible” Terry Norris (24-3) on March 31, 1990 in the Beast’s comfortable den in the Sun Dome in Tampa, Florida.

With about two minutes left in the first round, Norris put Mugabi on Queer Street with a crunching left hook and then quickly (but cautiously) went for the kill. Mugabi, however, was not a willing victim and fought back gamely. After a wild exchange, Norris finished the job with a beautiful straight right that sent the Beast to Animal Dreamland. It was over almost before you could chant, “Beast, Beast, Beast.” Here it is: https://www.youtube.com/watch?v=IHc1aUFbP7k

This was a case of the perp getting perpetrated as Mugabi had enjoyed more than his fair share of brutal muggings, but this time he was on the wrong end of a sudden assault. John was one of the most feared punchers in boxing, but this time it was “Terrible” Terry Norris who showed monster power. It would not be the first time.

In 1993 in Texas, Norris duplicated the Mugabi slaughter by mugging Joe Gatti (Arturo’s brother) in the first round. He also started this one with a jolting left hook with two minutes left in the round and then finished it with a final volley and a straight right that connected flush and sent the 20-1 underdog through the ropes and totally done. Have a look at the slaughter but don’t confuse it with the Mugabi savagery: https://www.youtube.com/watch?v=BHuZcZ09vTA

Postscript: According to a report by Todd Dewey in the Las Vegas Review-Journal dated December 26, 2012, “due to repeated blows to his head, Terry Norris suffers from Chronic Traumatic Encephalopathy – previously known as pugilistic dementia, or punch-drunk syndrome. It’s a degenerative brain disease with symptoms that include memory loss, confusion, depression and emotional outbursts. Norris also is afflicted with Parkinsonism, a group of nervous disorders similar to Parkinson’s disease, and marked by muscular rigidity, tremors, speech and swallowing problems, balance and walking problems, and more.” What happened to such a wonderful boxer and wonderful person is heart wrenching but remarkably and against all odds, he is fighting back like the champion he has always been. See: http://www.mixedmartialarts.com/thread/2109173/Sad-news-about-boxer-Terry-Norris/?page=1