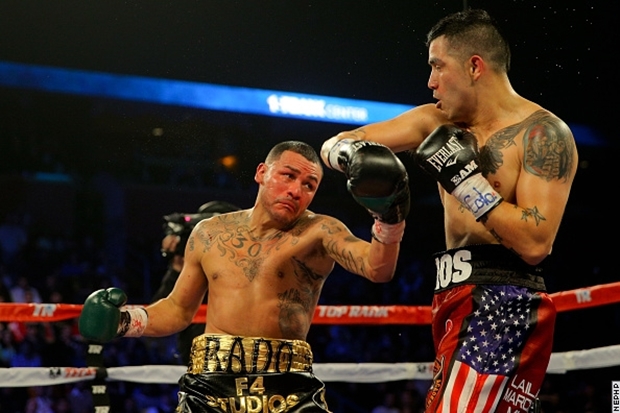 “The only thing worse than losing, is never trying to win”

The writing, like a graffiti artist admiring his work, was painted on the wall for all see. Mike Alvarado wasn’t prepared for the third installment of his classic battles with Brandon Rios. With a lingering legal case waiting after the outcome, Alvarado laced up the gloves and walked out to 9000 fans cheering his name, with his entourage on tow. This time was different though, the same aura of the calm before the storm was replaced. Alvarado’s usual grin with a flash of smile was replaced with a scowl, a sense of worry as he glanced through crowd.

Rios on the other hand was bouncing up and down, relaxed like it was just another day at the office. “Bam Bam” was ready, focused to finish the job at hand, prepared to endure whatever it took to have his hand raised in victory. He smiled as he made his way towards the ring, excited to enter the “truth serum” for a third and final time against Alvarado.

As round one proceeded, it became painfully evident that Alvarado wasn’t physically or mentally right. Towards the end of the round, Alvarado is staggered and cut by a left hook from Rios. By the end of round one, the thousands of fans cheering for Alvarado were hushed. Alvarado’s face looked like it had been in a twelve round battle only 3 minutes in. The fight was over, figuratively, the energy drained from the Broomfield Event Center as the hometown solider was being publicly executed.

As round two began, you would have thought Rios was Chris Kyle, sniping Alvarado with shots Mike could not see. Rios couldn’t miss, Alvarado couldn’t move, the crowd began to turn on it’s hometown fighter. As Alvarado fought bravely in adversity, in a battle he was losing easily by the second, Alvarado ate uppercut after uppercut. With his hometown fans booing his performance, Alvarado walked to his corner a beaten and wounded fighter. Rios knew the end was near…

In the corner of Alvarado, there weren’t many instructions being given. There was more concern from his team then actual words of wisdom. They sensed their fighter was on borrowed time, bruised and battered, they gave him one more round to turn the fight around.

Midway through the third, Rios drops Alvarado with a picture perfect right uppercut. The last gasp of fight left in Alvarado was gone. The arena knew it, media row knew it; the gladiator that is Alvarado, knew it. Alvarado finished the round and somberly headed to his corner.

As the round card girl made her way around the ring, as Jim Lampley and Andre Ward recapped the action from round three, referee Jay Nady and the ring side physician hovered over Alvarado in his corner. I turn to my fellow colleagues amongst press row, “they’re going to stop the fight”.

And then it happened, the climax to a thrilling trilogy, has ended. As Rios jubilantly celebrated, Alvarado slumped in his corner, defeated in agony. As the ring filled with supporters and entourages, the crowd turned on it’s once cheered hero, a state of sadness filled this writer who has covered Alvarado for over 10 years. As critics and fans berated him on social media, calling him a quitter, I was taken back too February 28, 2004. On that date, close to 11 years ago, Alvarado debuted with a 1st KO over Istafa Jihad.

I sat ringside not knowing a future world champion was in my presence. A young man who would carry his city on his back for over 10 years. As Mike admitted in his post fight press conference, he was ill prepared for his battle with Rios. However, it had nothing to to with training, this was all about nutrition. Alvarado is a blood and guts fighter, leaving everything he has in the ring. With each battle, a part of his soul is left in the ring, his armor battered and chinked with every punch. And with blood and gut fighters, their life span in the ring is short, usually decaying over night.

He isn’t “shot” by any means but his ability to complete at the upper echelon of the game is over. Hopefully Alvarado will the take Johnny Tapia path, fighting locally on smaller shows, helping young up and coming fighters in the gym. I just hope his story doesn’t end the way Tapia’s did.

Rios was prepared, physically and mentally. He understood the significance of the outcome the rubber match had on his career. He joked with reporters, hung out with members at the Grudge Training Facility headed by Trevor Wittman. He was the fighter who looked and felt like he was more at home than Alvarado. And when he stepped through the ropes on Saturday, he took the crowd, the energy and Alvarado’s heart with him.

Rios earned himself another payday, another high profile TV slot with his performance. A public battle with Victor Ortiz just moments after his career saving victory has already begun. These two gentleman go back to days of young boys duking it out in the gym. Whoever it may be, expect it to be a well-recognized name as Rios backs down from no one.

Throughout the rivalry, both fighters showed admirable respect for one another. They shook hands, posed for pictures, spoke highly and touched gloves at the first bell. They crossed paths twice before and knew the road that lied ahead was a painful stretch of truth and fire. For these warriors, the ending mirrored the beginning, with Rios stopping Alvarado in an action-packed, thriller. They will forever be linked by history as well as blood shared.

So we say farewell to the relationship that was Alvarado-Rios, toast to the memories and the grueling fisticuffs. However you may feel towards both fighters, you can never take away what they gave us, the fans, at their own expense. We will never know what it takes to lace up the gloves and bleed in front of millions of viewers. There is no disrespect from this writer, just memories of the sport I fell in love with as a child and a Denver fighter’s debut a decade ago. Thanks Mike for everything.