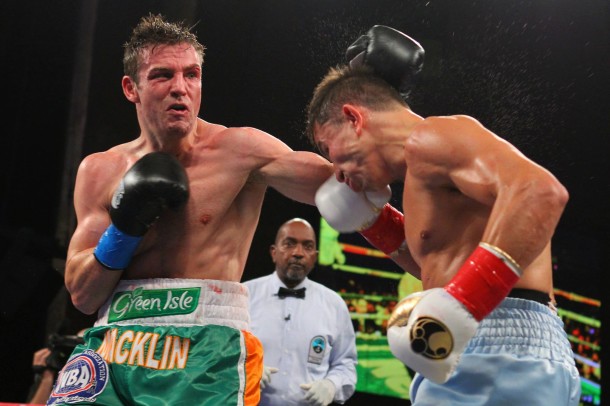 After a tough loss to Jorge Sebastian Heiland this past November, insiders thought they’d seen the last of Matthew Macklin (31-6, 20 KO’s).  Macklin however, isn’t in any rush to hang up the gloves.  The former EBU and BBBofC middleweight title holder plans on returning May 28th at a card in Birmingham, England to test his capability to compete at the world level.

According to Macklin, retirement wasn’t an immediate option following the Heiland contest, as he told Irish-boxing.com, “I was never going to jump the gun and retire in front of all the cameras after the fight. I’m quite level-headed so I took some time to think about it but it was a genuine possibility that I wouldn’t fight again, but being given the chance to get back in the ring and see whether or not I’m truly able to compete at this level is something that I feel I have to do.”

“Mack the Knife” as he’s known, has always been viewed as a tough competitor, though he’s always seemed to fall short when it came to realizing his goal of becoming a world champion.  In 2011 he lost a spilt decision to WBA champion Felix Sturm in Germany, followed by an RTD 11 loss to Sergio Martinez at Madison Square Garden in a WBC Diamond belt contest that saw him drop Martinez in the seventh frame before being dropped twice himself in the 11th round.  A third try at middleweight honors saw Gennady Golovkin, the IBO and WBA champion score a third round knockout in what was a one sided contest for as long as it lasted.

Macklin had picked up two wins following that bout, including a 10 round decision over previously undefeated Lamar Russ, before losing to Heiland in Dublin.