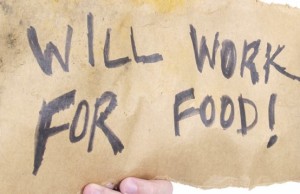 There was a time in the history of this world where someone could be a kid looking forward at a life ahead of him and say “I want to be a writer when I grow up” and not get laughed out of the room. The scribe’s life was a worthwhile career for someone with the talent and the desire to do the job, and going to journalism school was not an exercise in setting oneself up for a lifetime of futility and possibly homelessness.

Of course, this is 2015. Creativity, quality journalism, the writer’s craft, they’ve all been sacrificed to the cause of “citizen journalists” (the worst euphemism your columnist has ever heard for dollar-store-knockoff bloggers pretending to be writers.) The Huffington Post, Bleacher Report, and every “writing gig” on Craigslist listed for no pay? They’re the problem. They proved an interesting thing about the market—people don’t care if it’s good, all they care about is something to gossip about or “go viral” on Facebook.

Writing itself isn’t even really “writing” anymore. These days, you’re not a writer (or a video producer, or an artist, or anything else creative) in the eyes of the people who dole out the cash, or would if they weren’t so hell-bent on exploitation. You’re a “content creator”. “Content”. Optimize it for a search engine, spam the shit out of your friends to get them to share it, hope it gets a million views, then forget about it when people’s squirrel-like attention span pops them over to the next big thing a week later, your 15 minutes of fame exhausted. It’s a sorry state of affairs.

Yet those of us driven to write and produce quality stuff keep soldiering on. Why do we do it? It can’t all be for love of the game. At the end of the day, just about all of us are taking time away from another life. There are office jobs, commutes from hell, TV and video games and girlfriends and just plain getting a good night’s sleep, all those things we could be doing but for the fact that we’re so driven to write.

I can’t speak for anyone else. I can speak for why I get up at three in the morning to write because it’s the only reliable time I can find to get words on the page, why even when I could just throw my hands up in the air and call it a life, I write like someone whose ambitions are still very much alive. Four days a week, I do this. Over five thousand words, between What If and the FNF stuff and this column every Thursday morning. I write the equivalent of an 80-page double-spaced doctoral thesis every single month; I did it for two solid years back when I was still going to college in my early thirties; I do it now, my commitment to the craft energized and renewed by picking up the What If beat back in August last year.

I do it because it’s what keeps me alive. I have a soul-destroying office job, one of those “put numbers into boxes in spreadsheets so someone who isn’t me can get rich” things where no amount of corporate bullshit can stop me thinking that “if ESPN called to hire me on as a staff writer and said move to Los Angeles or Bristol, I would be on the next plane.” That includes Grantland; looking at what Bill Barnwell does with the NFL or Zach Lowe does with the NBA, making it their life as well as their work, those guys have the life I want. Sure, it’s a different ballgame with boxing; this is less about sportswriting and more about massaging the egos of the people who can, should you lose their favor, give you the “you’ll never work in this town again” speech, but not for nothing has my Friday Night Fights preview been spotlighted on the actual ESPN Friday Night Fights Facebook page. Guys who matter in the sport, guys like Nigel Collins and Bernardo Osuna, they know who I am and what I do.

When I was at a press event in Reno, covering the Chris Arreola-Kendrick Releford fight on FNF in 2011, there were guys on press row who not only knew who I was, but who said they’re fans of my work. Whatever the vaunted “reputation” of the Boxing Tribune itself, the piggies-at-the-trough throwing bombs at us that Paul talks about in the Monday Rant from time to time, I found that none of that stink-eye had rubbed off on me. I’m just a guy trying to stay objective (most of the time) and write about the guys who don’t necessarily get the big press. If someone pops a free sandwich my way or gives me pizza money to write, that’s great, but soulless accounts receivable work pays my bills for now; I don’t have to act like a whore and indeed prefer not to if I can help it.

Artists rant all the time about “selling out”, and it’s something I’ve thought about. See the line a couple of paragraphs up about being willing to drop literally everything (including, oh by the way, the woman in my life, who has already told me she won’t follow me to California and she sure as hell won’t go all the way to Connecticut with me—sorry, love, but writing was around before you were and it’ll be around long after you’re gone) for a shot at the big time. Put me in the studio on FNF and I’ll go full-on On the Waterfront. “Look, Ma! Top of the world!” If trading pizza money for a W-2 or even a 1099 is “selling out”, then there’s a great big “For Sale” sign hanging out front in my brain.

Thanks for indulging me this week. Some weeks, I have Great Big Thoughts that add insight and worthwhile commentary to the body of work about the sport of boxing. Other times, all I can think of is the office I’m going to go work in for eight hours and the politics and the bullshit and the overwhelming desire to go fishing then gut the fish right on my desk because to hell with all of this. Writing is what keeps me from having an existential crisis. Doesn’t matter if it’s speculative fiction I’m planning to turn into a book later this year (What If’s Excellent Heavyweight Adventure is getting a rewrite and expansion this spring and coming soon to a publisher or Amazon near you) or calling professional boxers tomato cans in critique of ESPN2’s matchmaking.

I could no sooner live without my creativity than without food and water. Someone, please, let me do this full time.

Fox Doucette writes the weekly What If series and covers ESPN Friday Night Fights for The Boxing Tribune. His weekly opinion column, The Southpaw, appears on Thursdays. Fan mail, hate mail, and sportswriting jobs can be sent to beatcap@gmail.com.