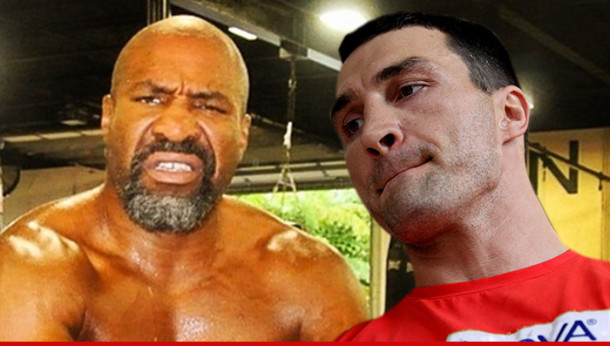 Earlier this week, word had been spreading, mainly through Briggs himself that he and the four-belted world heavyweight champ would face off in September, assuming Klitschko gets past Bryant Jennings in April.  Boente however, denies that any deal was in place and that Briggs simply made the whole thing up.  Klitschko, Boente says, will look to face either newly crowned WBC champion Deontay Wilder or Tyson Fury following the Bryant contest.

Briggs, a former WBO heavyweight champion, retired in 2010 following a one sided beat down at the hands of Wlad’s brother Vitali in a contest for the WBC heavyweight title that left Briggs in the intensive care unit of a German hospital afterward .   He returned in 2014 and has since picked up six wins over nondescript opponents, ending five of those bouts in the first round and winning the NABA and WBC Latino heavyweight titles.  Along the way, his “Let’s Go Champ” campaign, including face to face taunting of Wladimir, has garnered more attention than his fights; showing up at a Klitshcko training session, in a Miami restaurant, and most recently in the waters near Hollywood, Florida where he “indirectly” knocked Klitschko off a paddle board.  The scenes were so comical that many thought they were being staged by both fighters.

Aside from the restaurant scene, where the champ dumped a glass of water on Briggs, Klitschko hasn’t shown much of a reaction, and has conducted himself in a professional manner and remained relatively quiet on the matter until the paddle board incident.  Speaking with German magazine Sport Bild, Klitshcko said, “Shannon Briggs has stepped over the line in terms of good taste. I want to punish him for his cheekiness and really want to fight him”.

Safe to say that if Briggs truly does want a fight with the champ he’d be best served to stop wasting his time chasing him from place to place, and start chasing some credible opposition instead.