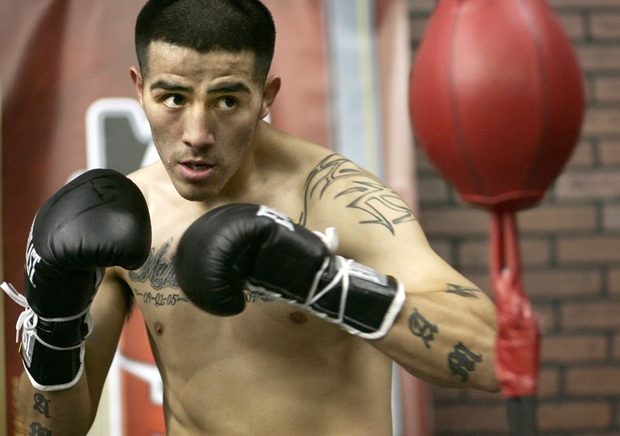 Brandon Rios tore through Mike Alvarado on January 24, scoring a third round TKO victory, putting an emphatic end to their trilogy.

Rios was sharp, in great condition, looking capable and ready to handle any opposition the welterweight division has to offer. This is the Rios fight fans want to see. “Bam Bam” snapping heads back, intent on, and enjoying the task at hand- thoroughly beating the guy in front of him.

2015 is still new, and Rios has a lot of calendar left to keep the thrills coming, and there’s nothing he’d rather do. “Y’know, I don’t call out names,” Rios said, “and I tell everybody and I might sound like a broken record, but I leave that to my manager Cameron Dunkin. There’s a lot of big names out there. I’m ready to fight and fight whoever they put in front of me. I want to get back on top and fight the best.”

Rios is well acquainted with the welterweight competition, and offered his opinion on a few of his peers:

Alvarado was thoroughly devastated in their final match, and Rios insists he and trainer Robert Garcia employed no new training methods but simply went back to their old ways. “It was the fact I remembered my roots,” he said. “The way I fought early in my career and what got me to the Pacquiao fight. I had gotten cocky and forgotten what put me there. I had forgotten what I had in me, and it was good to get back to my roots, and I felt good.I surrounded myself with good people, especially my wife. She keeps me grounded.”

The Alvarado fight is also the second fight where Rios has used chef Juan Chan, who is becoming an important part of Rios team. “He keeps me not hungry so I don’t cheat on my diet,: Rios said with a laugh. “With his cooking I made weight perfect. He does an amazing job.”

Boxers retire early and many discover careers to fall back on, but not Rios. He frankly admits trouble is his forte. “I would just be in trouble a lot,” he said. “The way I was going I’d be in jail and locked up. I probably wouldn’t be doing anything. The way I grew up, the people I hung out with, I was going a bad route.”

Training and fighting are two things Rios loves, and those routines keep him busy and focused but when the fight is over and there is some down time, it’s the family life he really thrives on.

The Rios household is a busy one– the head of the family being one of the most popular prizefighters of his day, with an outrageous personality and a tendency to be a little profane, and 3 small children under the age of five. Laughing Rios said his wife Vicky gets all the credit for keeping everything in line. “Yeah my wife is the tough one,” he said. “She takes care of us very well. I’m real easy going. But she doesn’t take anybody’s bullshit. She doesn’t even take MY bullshit. She works as a therapist for troubled youth so she has a tough job during the day, and another one when she comes home.”

It may not be classic “Ozzie and Harriet” but it’s Rios’ favorite thing to do – spend time with family. “I like to honestly,” he said. “When I train I push my kids away so I spend as much time as I can at home. I like being home. It keeps me out of trouble. I don’t have to worry about behaving. I like to go to Disneyland with the kids. We travel when we have time. My wife probably gets tired of me but I like to be at home.”

Boxing has made a comfortable life for the Rios family, but the father of three girls, appropriately named Ava, Mia and Laila for iconic women boxers, would NOT want his daughters to have a boxing career. “My daughters, I definitely would NOT allow it and I would disapprove,” Rios said, but feels just the opposite about his sons embarking on a boxing career, even if he does harbor just a little parental worry. “I’d support my son’s boxing 100% but it would be tough- I don’t know how I’d react seeing my kid get hit.”

There is a lot of boxing in store for 2015, and Brandon Rios has gotten his old boxing self back- the focus, drive and determination. There’s a weight class stacked with opponents. Rios summed up his feelings about the challenges ahead, in his own unmistakable terms: “Let’s DO IT!”