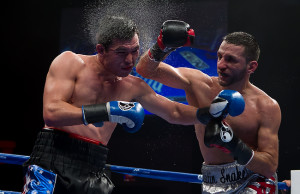 Welcome to The Southpaw, the column that throws punches in bunches and tips the cards its way every time:

Last week on Friday Night Fights, we saw Abie Han nearly steal a split decision from Sergio Mora despite most of his punching hitting either Mora’s gloves or nothing but thin air. It was one of those cases where there was a big divide between the scorecard Teddy Atlas gave and the one the social media audience at home came up with, and the split decision from the judges at ringside showed that this was a “depending on your perspective” sort of fight.

Hell, from Teddy’s point of view, had either of the judges who went for Mora gone the other way, it looked like a classic Atlas meltdown at the quality of boxing judging was in the offing. We know Teddy’s not on the take; his track record proves it. So why was he all-in for Sergio Mora, going so far to give the fight 117-112 in the Latin Snake’s favor, a big divide from the scores actually returned?

Teddy used one of my favorite phrases throughout (indeed, I may have picked it up from him in the course of my televised boxing education these last seventeen years on FNF). He kept imploring the fans at home to watch how Abie Han’s aggression, his racking up the “Thrown” number on the CompuBox stats, wasn’t “effective” aggression. In Teddy’s mind, Han had done nothing of any merit at all even as he threw twice as many punches as his opponent.

I put the question to my Facebook audience, asking not only the Tribune staff but FNF guru Nigel Collins what they thought of the action. Collins had the fight the same way I did, 114-113 Han, six rounds to six, with a knockdown in the tenth proving the decisive factor. Our own Fearless Leader Paul Magno had it 114-113 the other way, seven to five for Mora. ESPN’s Facebook app had it 115-112 (when the rounds system is converted to 10-point must) for Han. Why is it that four people (Teddy, Nigel, Paul, and myself, all of whom have watched and scored hundreds of fights over the years) could have such wild disparities in the interpretation of victory?

The answer may be as simple as “effective is in the eye of the beholder.”

Still, there’s got to be more to it than that. Max Kellerman once said that whoever you’d rather be at the end of a round, that’s the guy who won. I’ve said repeatedly some variation on the theme of if all else fails, reward the guy who’s letting his hands go. Styles make cliches, but sometimes it really does come down to boxing being an entertainment business. Unless a guy took it right on the chin from a smaller but far more decisive punch volume, he’s going to get a whole lot of the benefit of the doubt just because (to grab one of Teddy’s lines) “he’s just trying in there.”

In other sports, “defense wins championships”. This is true enough in boxing as well, but really, unless a guy is countering like Floyd Mayweather or Juan Manuel Marquez, how many guys have won rounds on defense alone? Sergio Mora simply wasn’t moving his hands last week. When he opened up and actually started throwing, exploiting the tendency of Han to (another Atlas line) “get angry if you miss him”, there was the effect that turns a judge’s head, namely fist meeting face, sweat spraying, and that deformation of soft tissue that makes fight photos so much fun to browse through.

Everyone watching that fight knew that Abie Han wasn’t landing effectively. We’re not fools. We could see the punches hit Sergio Mora’s defense rather than getting to his face and body; we saw Mora sitting in his corner with no apparent signs of damage…yet we scored the rounds against him, those of us who gave the fight to Han.

This tells me that in the rock-paper-scissors world of boxing judging, “move your hands” is the most powerful advice a fighter can be given. If a fighter throws as many punches as his stamina allows, he not only gets to sway the minds of judges who give him credit for effort, he’s also keeping his opponent from getting set and hitting back; unless a fighter is 1987 Mike Tyson, moving seamlessly from defense to offense borders on impossible, or at least it appears that way to watch fighters actually fight. Keeping a guy covering up, even if your punches aren’t landing, is a key component in looking like you’re the one dictating the pace and engaging in the elusive “ring generalship” that is another of boxing’s great myths—who, even an expert, can provide a definition of such a term?

The simple fact remains that there’s an old saying about close fights. “Ask five different people who won that fight and why and you’ll get five different answers.”

I asked five different people. More than five, in fact—I asked my entire boxing-loving Facebook community, from Tribune staffers to guys I talk fights with more generally. I got as many different answers as there were people to answer the question, showing that even the experts make this a subjective game.

The one theme that recurred was that aggression is effective even when it isn’t, and that the idea that you have to be effective in order to win rounds is, when it’s all said and done, a myth. Sure, your opponent can take those rounds from you by actually landing shots the judges remember, but why risk being seen as not being dominant? Move your hands and good things happen. Sometimes the sweet science is as simple as all that.

Fox Doucette covers Friday Night Fights for The Boxing Tribune and writes the weekly What If alternate-history series for this publication. His opinion column, The Southpaw, appears on Thursdays. Big thanks to the entire Facebook boxing audience for their thoughts on this subject. Fan mail, hate mail, and a gig as a fight judge can be sent to beatcap@gmail.com.