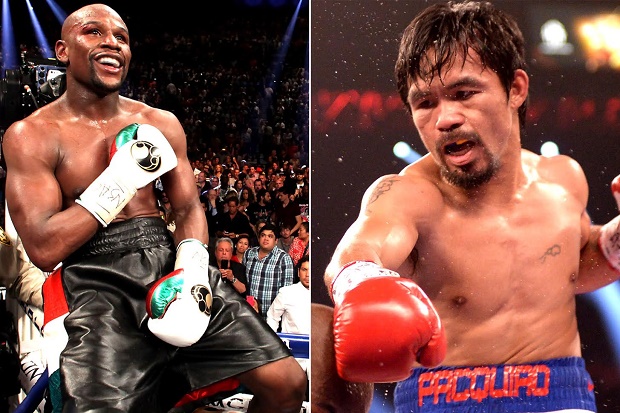 Hola familia y amigos, welcome to a tactical urban cammoflague colored edition of Central America’s highest rated, highest grossing, most money-spinning weekly proper pugilistic paper, The Sunday Brunch – We are the ‘Bill Nye’s bow tie’ of weekly boxing columns. Last time we introduced you to the EIGHT THINGS MANNY PACQUIAO MUST DO TO DEFEAT FLOYD MAYWEATHER…Check it out HERE, here or HERE. This time, in the interest of fairness and transparancy, we’re helping out the ol’ Money Team with their very own top eight list of tips, tactics and strategy. Hold on to your TMT socks and don’t forget to purchace a $120 hat, we’re about to sort through this pile of Louis Vuitton coustomizable Ferrari Red knapsacks. So, submitted for your approval and back by popular demand, these are the top EIGHT THINGS FLOYD MAYWEATHER MUST DO TO DEFEAT MANNY PACQUIAO! With that being said I gave you your instructions in the dressing room, what I ssay you must obe – Cuidate, escucha mi, toca los manoys u buena suerte…Let’s get it on!

EIGHT THINGS THAT MANNY PACQUIAO MUST DO TO DEFEAT FLOYD MAYWEATHER can be found HERE.

8. Take time with a wounded hand (because it likes to heal).

Manny Pacquiao will likely be the toughest opponent you have faced in many years. While his power may have “diminished” in recent years, he retains his speed, footwork and killer instinct. You’re undefeated and like you said, he may have losing on his mind somewhere being that he has experienced it – but don’t overlook him. Pacquiao is fresh in as far as his last fight being a walkover against Chris “Let Me Out Of The Cage” Algieri. Take your time, don’t rush into melee, but at the same time…

7. “If he makes any mistakes he’s going to have to pay”

Keep Manny Pacquiao on his back foot. The Filipino fireball operates best when he’s approaching his opponent – you’re no opponent, you’re Floyd Mayweather. Walk him down. Keep Pacquiao going backwards, be wary of his counters and make him pay for his mistakes. While this is boxing at its highest level, the most high-end pugilistic combat that money can buy, mistakes will be made. Keep a sharp eye out for it, no matter how subtle – then capitalize.

Ordinarily, you take a couple of rounds to adjust to your opponent, a data collecting period if you will. Against Manny Pacquiao those short few rounds will be critical to your success, so don’t completely give away those rounds. Pacquiao will come out fast and try to put money in the bank early. Instead of seeing what he has to offer, let him expel some of his nervous energy and wait for the counter. Against Ricky Hatton (in 2007), you let the Brit invade your personal space and it threw you off balance until you pulled away in the bout. Don’t let Congressman Pacquiao inside your space bubble, he’s not going to be like anyone you have faced. Keep him at elbows length – push off with your gloves and forearms to get him into firing range.

If you’re not counting your fight against Robert Guerrero (and I’m not, because you barely got grazed), you have not faced a southpaw as dynamic as Pacquiao since maybe Zab Judah back in 2006. Don’t get me wrong, the challenge presented by the awkward and unorthodox Filipino will be a much bigger puzzle to solve than was the New Yorker (who gave you plenty of troubles). Manny Pacquiao has his wonderful right jab lead followed by a straight left whilst he ducks down to the right to avoid the incoming counter. To combat this maneuver, you will need to know where his escape will be…Plan a few steps ahead of the Pacman, route his way out and intercept him. Keep it tight and clean, and be aware of his left hand.

4. Sun goes up, sun goes down. Tide goes in, tide goes out (you can’t explain that).

Against Canelo Alvarez, you put on a truly wonderful performance against a man who most thought would be able to not only take your best shots, but have the ability to ignore them and utilize his youth and power to neutralize your gifts. You stood right in the pocket, made the relatively green Mexican miss while right in his face – Use some of this game plan against Manny Pacquiao – There will be times that standing and trading with the smaller fighter will be the smartest strategy, the trick will be in finding those holes and exploiting them, then getting back out to range (where your advantage is much clearer).

Confidence is key. Make sure to avoid eye contact during the final instructions in the center of the ring, Manny Pacquiao will want to show you how unintimidated he is by you, but don’t pay attention to anything but yourself and your team. If and when Pacquiao gets some unexpected shots on you, keep composure, grab if need be and retaliate with purpose and intelligence. The Filipino is also a fantastic counter puncher, so don’t give him any opportunities to do so against you.

There may come a time within these 36 minutes of sanctioned violence where you get sent to the canvas. This will be the first official time that something like this would have happened, so you need to keep that in the back of your mind as a possibility. If (and when) it happens, be prepared to take a solid eight count before rising, take time to shake the cobwebs and get your legs back under you. Pacquiao packs a punch, make no mistake. The best case scenario for yourself would be to, as aforementioned, keep him at range where you’re most effective, out of his comfort zone (going backwards) and as off balance as possible.

Do not fight fair. This will be the most watched fight in the history of the sport, or likely any sport. The time for showboating is another, this is a night for victory and nothing more. Set up your rematch (if that’s what you want…Money May…), but more importantly, just win. When Pacquiao gets too close, send some elbows, forearms and palms his way to keep him honest. Don’t be afraid to take cheep shots ala Victor Ortiz. You, too, will have the benefit of the doubt and the referee will give you multiple chances (as he will with Manny Pacquiao) before he starts deducting points – A DQ is out of the question (unless YOU bet on the disqualification). Fight dirty if need be to secure the most coveted scalp in your collection.

Thanks for joining us again this week, team. We’ll have tips, tricks and codes for the Nintendo Entertainment System™ along with a step-by-step instructional guide on how to make cherry bombs (both the edibles and the explosives). We will be joined by Bill Nye the Science Guy at the JPL (Jet Propulsion Laboratory) live from California. We will be reviewing the best selling book “Physics of the Impossible” from physicist, Michio Kaku and maybe we’ll talk boxing if we have some time left over. Send all love letters and ‘tit pics’ to JESSEBOXINGTRIBUNE@GMAIL.COM, unfollow us on Twitter @JESSEBOXING and troll us on Facebook at JESSE IAN LARDIES. Until next time, sante.