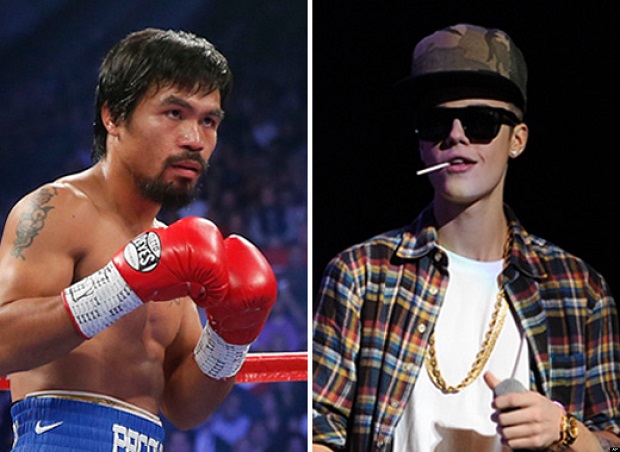 Hola familia y amigos, welcome to the number one weekly pugilistic paper from Panama all the way up to Orlando, Florida. This week we’re stylin’, profilin’, limousine riding and jet flying. Here, in The Sunday Brunch news room – Where we currently have more federal funding than NASA – we came across a hidden trove of your burning questions, comments and general queries about the cosmos. Hold on to your Filipino flag bandannas and hang yourselves with your TMT socks, we’re about to sort through this nonsense. With that being said, I gave you your instructions in the dressing room; what I say you must obey. Cuidate, escucha mi y toca los manos…Let’s get it on!

How do you see the (FINALLY, YESSSSSS) Manny Pacquiao-Floyd Mayweather fight playing out? Don’t you think Pacquiao’s footwork and hand speed will just be too much for Mayweather to handle? – Packie Manniao

Good to hear from you again, Packie. I’ve touched on this a couple of Brunches past, but Floyd Mayweather will have some tense moments as he adjusts to Manny’s erratic and extremely unorthodox fighting style. He will likely touch the canvas depending on how he handles himself during the data-collecting peroid. That being said, after adjusting and cutting off the ring appropriately, Floyd Mayweather will pull ahead and win a closer-than-it-should-be split decision (as for what I think will happen after the fight is going to be a different story altogether).

Do you feel that the addition of strength and conditioning coach, Alex Ariza will help Floyd Mayweather gain some kind of unfair advantage? – Reddie Foach

Thanks for taking the time to contact us, Mr. Foach. Being that Ariza worked in Manny’s corner for so long and it is widely known that the Argentinian S&C coach has some tricks up his overly tight sleeves. Freddie Roach once mentioned (after Alex Ariza was ejected from working on Team Pacquiao) that Alex would give Manny “shakes” and would not disclose what was in them and that he was “shady”. I think that Floyd Mayweather will have all the tools including a smart individual in his corner that utilizes a scientific approach to fitness – that combination is pretty dangerous for Pacquiao, who is himself a fantastic fighter, but follows instruction a lot more than does Mayweather, who rarely listens to his corner.

All I will say about that is this, true or not, they know who is in his (Mayweather’s) corner now. They worked with that individual for many years and with unbelievable success. Since his departure, Manny Pacquiao’s stoppage streak ended. Whether that’s a coincidence or not, something was up and to me, that request is a sign of worry.

How do I make fried rice? – Chakie Jhan

Easy! Take day-old long grain white rice you left uncovered in the refridgerator and run it gently through your finger tips until all the grains separate (I’d use food-grade gloves if I were you). Then massage oyster sauce, white pepper, mushroom soy sauce, msg, salt and sugar along with chicken bullion into the rice until coated. Heat up your restaurant-grade wok until white hot, add oil and coat the wok. Add scrambled egg and within two seconds add your vegetables and/ or meats. Stir-fry for 30 seconds, always moving, and then add your rice. Make sure to flatten rice with your Hok. Keep it moving but the goal is for every grain to have a touch of wok hey, or the flavor of the wok. Add water of necessary, finish with a bit of Kikoman soy sauce. The measurements will be revealed in a future edition, so stay tuned! By the way, Gong Hay Fat Choy, Cackie!

What did you think of the new PBC: Corner to Corner boxing special? Will anyone run like a chicken? –Gobert Ruerrero

Thanks for the email, Gobert. I actually rather enjoyed the near hour long episode. They even managed to show Adrien Broner in a decent light and not like his usual douchy self. They also kept Robert Guerrero’s overt Cross-Fit addiction to a minimum, which was nice. All in all it was interesting and, I think, more geared towards a casual fan. But, that’s fine with me. I will gladly watch more of them if and when they make new ones.

That is assuming that the battle-worn veteran, Miguel Cotto has enough to take down the Kazakhstani Cremator, that match up would be historic, indeed. I would see another tough battle, but in the 12th round of their fight, Floyd Mayweather was teeing off on the Puerto Rican. Mayweather would likely get a stoppage mid-way through that one. Many people ignore the fact that Mayweather had the flu in that fight.

Is it true that Justin Bieber is fighting on the Mayweather-Packquiao undercard? – Bustin Jieber

Thanks for joining us again, we’ll be back next time with more randomly assembled catchphrases, one-liners and run-on sentences. Hit us up on Twitter to tell us how great Manny Pacquiao then curse in Tagalog @JESSEBOXING or email us Nigerian scams at JESSEBOXINGTRIBUNE@GMAIL.COM. Until next time, sante.