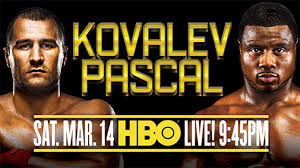 Kovalev can stake his claim to being the “man to beat” in the 175-pound division with a win on Saturday night. He holds three of the four world titles, and with a victory over Pascal he would have beaten the best fighter in the division not named Adonis Stevenson, who is tied to deals with Al Haymon and Showtime (Kovalev is with HBO).

The inability to make a Kovalev vs. Stevenson fight while both were under HBO’s banner frustrated fans, and after Stevenson signed with Al Haymon and effectively killed his ability to work with HBO many fans were left feeling like this fight would be a smaller scale Mayweather-Pacquiao. Jean Pascal marks the second straight opponent lured away from potentially signing to fight Stevenson, leaving him to settle for lesser fights against Dmitry Sukhotsky and Sakio Bika.

Kovalev’s rise to stardom was punctuated by a virtuoso performance in a shutout of Bernard Hopkins in December. Kovalev’s win over Hopkins answered any questions of the powerful Russian’s ability to effectively and intelligently box. Since knocking out Nathan Cleverly and winning the WBO belt in 2013, Kovalev fought a rather low level of opposition as the hype around him grew considerably. Among his successful title defenses were knockout wins over veterans Ismayl Sillakh and Cedric Agnew.

Pascal, once the WBC’s light heavyweight titlist, has taken a long and slow road back to title contention. Aleksy Kuziemski and George Blades were brought in as Pascal’s first two opponents after the Hopkins loss, and got him into position to challenge a vulnerable Lucian Bute. Pascal came out aggressive and got into Bute’s head early on in their fight. From round four until the end, Pascal did just enough to keep the fight even before blitzing Bute in the last minute of each round. His strategy was effective, as he scored a comfortable unanimous decision victory over Bute.

Pascal throws punches from just about every imaginable angle, but his punches often lose steam as he wings them wildly without sitting down on them. He’s got great athletic ability, but poor technique. Don’t be surprised to see Pascal lunging in to land his power shots and looking to duck and dodge his way out of danger on the inside. When he chooses to let his hands go, Pascal often throws several punches in a row, which can be disorienting for an opponent up against the ropes. But Pascal has shown that his gas tank empties fast, and he’s resorted to fighting in spurts as a result.

Kovalev is a tall light heavyweight with a good reach. His right hand often lands right behind his jab, which he uses as a range finder and blinder. He’s a very accurate puncher, and his above average footwork allows him to easily cut off the ring from fleeing opponents. We don’t know how well Kovalev can take a big punch, but we may find out on Saturday night.

Jean Pascal should be heavily motivated on Saturday night. He once sat at the top of the division after his win over Chad Dawson in 2010, only to see it all snatched away the next year. Fighting in front of his home crowd, Pascal has a chance to win three of the four light heavyweight world titles and a claim to the true champion at 175 pounds. But he’s facing a smart, patient, and powerful killer in Kovalev. Bernard Hopkins was able to take advantage of Pascal’s many mistakes, and it isn’t unreasonable to think Kovalev will be able to do the same, only with more power. With Kovalev’s patience, ring smarts, and power, I find it hard to see this fight going past seven rounds. Pascal will come out fast and energetic and it will take Kovalev a round or two to find his timing, and he’ll put Pascal away in the sixth or seventh round on Saturday night.

HBO will televise the fights beginning at 9:45 PM ET/6:45 PM PT with Vyacheslav Glazkov taking on Steve “U.S.S.” Cunningham in the co-feature. Isaac Chilemba faces Vasily Lepikhin in the opening bout of the night.