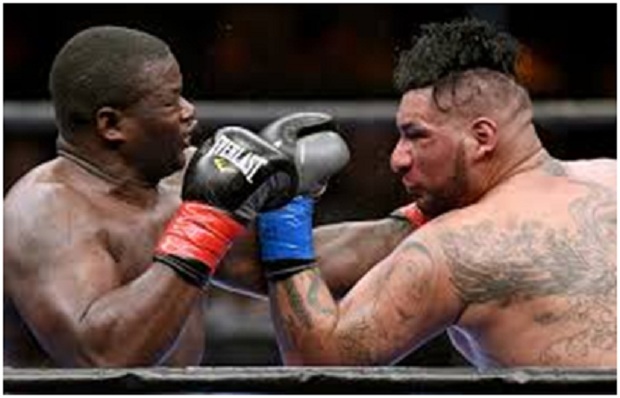 “We’re in boxing. I was hoping he got back up. I didn’t just want a cheap knockout. He has a heart like that and he got back up and made it a fight. He came out there to win a fight,- he’s a tough guy… -Chris Arreola.

When Chris Arreola was matched with Curtis Harper in what appeared to be a confidence builder and short night for Arreola, nothing that took place in the first round diminished this perception. In fact, when Curtis (who had won 5 in a row coming in) removed his robe exposing his flabby girth, my thinking was that he would exit the fight after getting hit with the first well-placed body shot.

As it was, the obese Harper (12-4, 8 KO) was floored by a crushing right hand in the opening round, but survived and then amazingly launched his own attack for the next three rounds on an equally obese Arreola (36-4, 31 KO). This sizzling action got the crowd up and roaring. What at first appeared to be an early icing was now becoming a hugely entertaining heavyweight brawl with both men getting rocked on several occasions.

In the end, it was Arreola having just enough left in his considerable “tank” to finish strong and take a hard-earned win in his hometown, winning on scores of 76-75, 77-74, and 78-73, but a draw would have been fine with the crowd and certainly closer to reality than a disgraceful 78-73 card turned in by Fernando Villarreal.

As for Arreola’s recent claims that he’s dedicating himself to the gym and taking the sport seriously, there was little evidence of that as he needs to lose flab if he wants to be more than a high-level gatekeeper.

And as for Harper, he too needs to sweat off the pounds, but no one should ever question his heart or courage as he came to win against considerable odds and almost pulled it off. Harper gained respect and much-needed celebrity for his effort. More to the point, he learned that this is the reward for not rolling over.