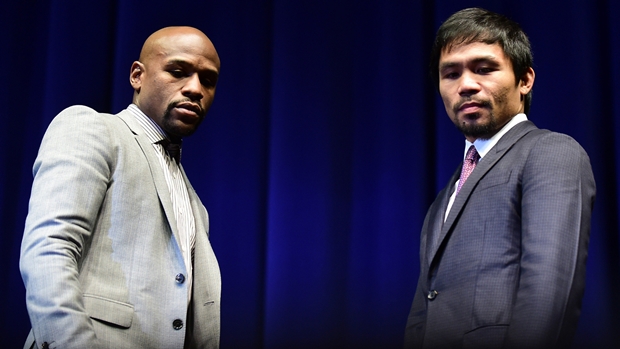 Blood and urine are being collected ahead of the May 2 Mayweather-Pacquiao mega-fight, but the only thing really being tested is the general gullibility of media and fans.

Actually, the entire voluntary PEDs testing movement is more farce than force in cleaning up a sport which is probably thick and dirty with performance enhancing drugs.

Imagine the gall of boxing’s power brokers in trying to peddle this feel good hustle. “We’ll take charge– hire a lab, a company to collect the samples and then schedule the “random” testing to our fighters’ advantage.” All of this, of course, above and beyond the mandates of commissions that don’t really care and have no plan, whatsoever, to move forward with a better testing protocol.

The cheaters are well ahead of the game and will always be ahead in a system where the kids continue to run the candy store. Hell, it could be argued that some of the cheaters even helped design the current testing system.

Five years ago, when the issue first emerged– thanks to Mayweather’s badgering of Pacquiao– the naivete of giving fighters three months warning before impending tests could almost be excused. Labeling such testing as “random” or “Olympic Style” could be seen as a sin of innocence.

Now, however, as we have learned a thing or two about doping and how it all works, we know that anything less than year-round, 24-7/365 random testing is mere play-acting. We know that a cheater can load up months before the actual fight and still enjoy the residual benefits of the banned substances.

We also know that otherwise credible testing agencies, when farmed out to do private gigs under individual license deals, tend to do piss-poor jobs.

The USADA (The United States Anti-Doping Agency) botched things horribly in the lead-in to the Erik Morales-Danny Garcia fight in 2012, essentially putting Garcia into a situation where he had to either get in the ring with Morales who had twice tested positive for a banned substance or walk away from a million dollar payday just days before the bout.

VADA (Voluntary Anti-Doping Association), promoted by some as the USADA’s chief rival in the area of PEDs testing, has been accused of sloppy sample-taking methods. Most notably, Brandon Rios pointed to VADA sample collectors’ sloppy, careless work as the reason he tested positive for the banned stimulant Dimenthylamylamine following his 2013 loss to Manny Pacquiao. According to Rios, collectors failed to bring a sealed collection kit to his hotel room following the fight and, instead, had him urinate into a regular drinking glass found in the room that was later emptied into the proper receptacle.

Perhaps worst of all, though, is that the sport has yet to work out an orderly flow chart showing who, exactly, has jurisdiction over testing results and penalties. This means, of course, that there will continue to be pure chaos and/or shady maneuverings when a positive test hangs a question mark over a big money fight. It also means that, with nobody having jurisdiction over punishment and the commissions only mildly interested in stepping in to discipline for testing done beyond their mandates, the “cheaters” will continue to go mostly unpunished.

Looking back at the fighters caught in the initial wave of voluntary testing back in 2012, none suffered any real repercussions other than some bad press and all of them are now back in the game, with career and earning power still intact.

I’ve used the analogy before, but the voluntary testing system is a lot like vacuuming without a bag to catch the dirt. Some of the filth may, indeed, be sucked up, but without a bag, it just gets launched into the air and into another area of the same room. As it is used now, voluntary testing before fights is an utterly fruitless exercise designed to give the illusion of propriety.

There is nothing going on, testing-wise, to ensure that either fighter will be absolutely clean on May 2. I’m of the opinion, though, that men are innocent until proven guilty. So, unless Floyd and/or Manny test positive for something, it’s only fair to assume both are clean. But this is an assumption– an assumption that wouldn’t need to be made if a real testing protocol was in place. With real testing, we’d know.

But just as troubling as the incomplete testing protocol is the way both sides are using that testing and the threat of dirty dealings as a psychological ploy.

Mayweather, especially, is guilty of creating the impression that he will be loaded to the eyeballs with anything at the disposal of Alex Ariza.

Mayweather and his team have carefully placed buzz throughout the media, indicating that Pacquiao’s former strength and conditioning coach, Ariza, is now working with Mayweather in some capacity.

Rumors had also emerged regarding Angel “Memo” Heredia, the architect of Juan Manuel Marquez’s 2012 one-punch KO of Pacquiao and a confessed PED distributor, working with Mayweather as well. Those rumors, however, were laid to rest by Heredia, himself in an interview with Ben Thompson of FightHype.

Although the Heredia rumor is crossed out, the fact is that Mayweather, the man who once patted himself on the back for cleaning up the sport, is willing to make it look as though he could be glowing neon orange by fight night.

Maybe it’s all a psychological ploy. An effort to get inside the head of a Manny Pacquiao who Mayweather still very much believes is or was at one point a dirty fighter.

If Mayweather wanted to use power pellets (as he once called them), he certainly would have access to them and he’s definitely working within a testing system where it’s still possible to cheat even while collectors are turning up to take his blood and urine.

Pacquiao, too. If Manny wants to cheat, he has access to just about anybody and anything he wants and the knowledge that he, too, can work around the system. The $5 million penalty Pacquiao advisor Michael Koncz wanted to put in place certainly gives the impression that someone connected with Manny is concerned about the issue and trying their best to mitigate possible penalties for a positive test.

The USADA, which is handling Floyd-Manny testing, mandates a four-year ban on athletes testing positive for a banned substance, although it’s unlikely that any commission would uphold such a ban.

More damaging would be the lawsuits filed from the opponent and business partners looking to recoup the money lost from a cancelled mega-fight. A positive PEDs test could very likely result in economic ruin for the guilty party.

The odd request for a $5 million penalty cap smacks of the same brand of cynicism from which emerged Mayweather’s alliance with Ariza. Both teams are playing the PEDs testing game and manipulating the fakery to serve their own best interests.

So much for the honorable pursuit of an even playing field.

But who really cares? Everybody involved in this fight knows how hard it would be to pull the plug now. Despite the USADA’s assurance that the fight would be “stopped on a dime” if either fighter tested positive, who can guarantee anything when a billion dollar fight is on the line and guys like Haymon and Arum are allowed to maneuver freely behind the scenes,  far away from the prying eyes of the public?

The good news in all of this is that, on May 2, we finally get Mayweather-Pacquiao.

The bad news is that this fight, which could’ve ushered in a new era of reform for the sport and its attitude towards PEDs testing, is pretty much just a billion dollar testament to the rotten status quo.

You can email Paul at paulmagno@theboxingtribune.com or read about “all things Paul” in any one of his monthly, self-written “Paul is Awesome” press releases.  You can also buy his book, Notes from the Boxing Underground! Paul is a full member of the Burger King Kids’ Club, a born iconoclast, and an ordained minister in the Universal Life Church.