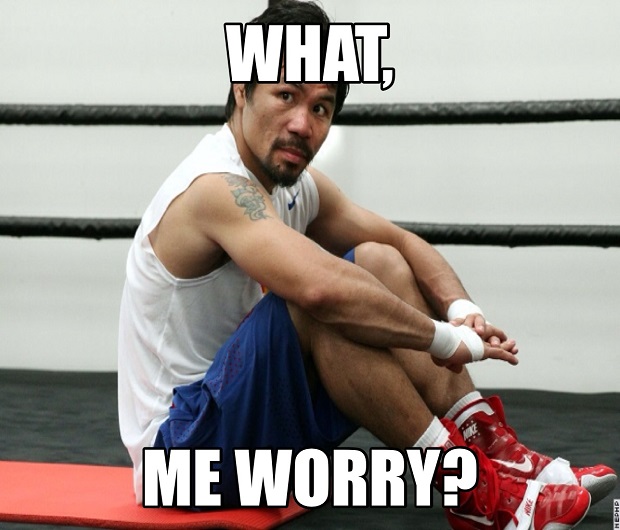 Hola familia y amigos, welcome to another star-spangled, shit kickin’ edition of Central Florida’s highest rated, most money spinning proper pugilistic paper, The Sunday Brunch – We are predicting that Shannon “The Cannon” Briggs’ obscenely muscular physique will betray him in five years time and he will begin to look like a melted fudgesicle a la Hulk Hogan. This week we’re tackling several sensitive subjects including Gary Russell’s ceiling, Vasyl Lomachenko’s potential, Mayweather-Pacquiao news and AMC’s The Walking Dead season finale! So, hold on to your autographed J’Leon Love Underoos and stock up on diet Hateraid, we are about to sort through this nonsense. With that being said, I gave you your instructions in the dressing room; what I say you must obey – Cuidate, escucha me, toca los manos y buena suerte…Let’s get it on!

Former amateur standout, Gary Russell Jr. looked as sharp as ever Saturday night in dismantling rugged banger, Jhonny Gonzalez for the WBC World featherweight title (which the Mexican snatched from the capable Abner Mares back in 2013 via first round stoppage).

Russell has been largely guided on the path of least resistance for most of his professional career, but in June of last year he squared off against one of the more complete fighters in the sport today in Vasyl Lomachenko. Aside from some rather far fetched scoring (112-116 x2, 114-114), most unbiased observers saw the Ukrainian taking nearly every moment of their encounter.

Since that night, “Mr.” Gary Russell took a unanimous decision from Californian, Christopher Martin and now has a solid victory over Gonzalez. Some important questions remain, though. Is Russell keeping his new WBC title warm for Vasyl Lomachenko? Will the Washington D.C. native ever be able to cope with the accuracy and boxing acumen of “Hi-Tech”?

Vasyl Lomachenko may be one of the best fighters to ever hail from the Eastern Bloc – he is an elite group of warriors that includes the Klitschko brothers, Gennady Golovkin, Ivan Drago and some other very good fighters whose names feature hard consonants and the letters “K”, “Y” and “O” all mixed up in their names.

Sometimes, a fighter will just have another warrior’s number. Jermain Taylor over Bernard Hopkins comes to mind…As does Kelly Pavlik over Jermain Taylor. Lomachenko has Gary Russell’s number, so as far as a rematch is concerned, it’s not wise for the young American – no matter how much time passes.

According to a “report” from a mainstream boxing website, Hall of Fame trainer, Freddie Roach seems to think that the key to dismantling Floyd Mayweather on May 2 lies in Manny Pacquiao’s footwork.

Granted, the Filipino fireball has some of the best movement in the entirety of the sport, his lateral shifting has baffled many world champions. However, I think this public statement is either a misleading misdirection meant to shift focus away from their real game plan, or a huge oversight on his part (the former likely being the truth).

Floyd Mayweather has an uncanny ability to control range inside the squared circle. This will be a very important factor as the rounds pile up (and this one has 12 rounds written all over it). For Manny Pacquiao to be effective, he’s going to have to utilize a combination of hand and foot speed along with an unorthodox shot selection.

This match up will likely come down to in-ring adjustments. From history, we can honestly say that Mayweather, more often than not, takes a few rounds to adjust to his opponent – to really dial in his range and counter punches. Manny Pacquiao needs to stay outside of Floyd Mayweather’s comfort zone (which he uses forearms, elbows and palms to get to his desired distance) and do some new things in the ring to shock Floyd, and perhaps make him take that extra split second to think.

Fighters on this level have everything down to instinct, to muscle memory. When they are made to make pause, to take that additional fraction of a moment to contemplate their next move, that’s where disaster often lies. The boxer who can cause that momentary hesitation will have a massive advantage, be it by counter punches, power shots or with extraordinary footwork and hand speed.

Thanks for joining us again this week. Next Sunday we will have new recipes, a review of The Walking Dead 90 minute season finale and perhaps, if there’s time, some boxing talk. Don’t forget to send all Devon Alexander “Huge Head” memes to JESSEBOXINGTRIBUNE@GMAIL.COM or “friend” us on Facebook at Jesse Ian Lardies. Also, follow our daily blog updates on Twitter @JESSEBOXING where we often Tweet pictures of cats, food and half naked men fighting. Until next time, sante.