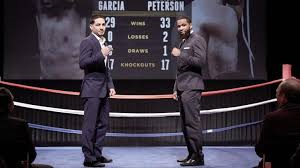 This Saturday, April 11 at the Barclay’s Center in Brooklyn, New York, Danny Garcia (29-0, 17 KOs) takes on Lamont Peterson (33-2-1, 17 KOs) in a twelve round non-title bout, contested at a 143-pound catchweight. This marks the second time NBC airs the new Premier Boxing Champions series. The action will begin at 8:30 PM ET/5:30 PM PT.

Garcia currently holds the WBC and WBA junior welterweight belts and is considered the top talent in his division, but a successful 2013 was negated by an underwhelming 2014 that had most fans turning their backs on him after clamoring for Fighter of the Year honors in 2013. Dating back to 2011, Danny Garcia has wins over Erik Morales (twice), Kendall Holt, Amir Khan, Zab Judah, and Lucas Matthysse. In 2014 he fought to a disputed split decision win over Mauricio Herrera in Puerto Rico in March, and closed out the year with a win over anonymous lightweight Rod Salka.

Lamont Peterson, the current holder of the IBF junior welterweight belt, comes into Saturday night’s fight flying under the radar. His last two fights have been against little-knowns, Dierry Jean and Edgar Santana. But over the course of his career Peterson has fought against quality fighters. His two losses have come against Timothy Bradley and Lucas Matthysse. He has a draw against a young, still-fearsome Victor Ortiz, and wins over Victor Cayo, Kendall Holt, and Amir Khan.

As three of the four major belts are held by the Garcia and Peterson, yet none are on the line, many fans and media have voiced their displeasure over that fact. But it shouldn’t take away from the fact that Garcia and Peterson are two fighters at or near their primes, and they aren’t fighting years after their matching would be considered relevant.

Garcia has the edge in power and experience. He’s at his best when he’s able to come forward and bang away at his opponent’s body. He’ll often finish a combo with a hook or two to the head. Garcia has impeccable timing and a knack for finding openings while his opponent is punching, as evidenced by some of his highlight reel finishes. Garcia’s left hook has been his money punch of late.

Garcia often starts slow, and leaves himself wide open to counter shots while he lets his hands go. The knock on Garcia is his lack of foot and hand speed and occasional sloppiness. While Garcia excels in certain areas, he’s not exceptional. He doesn’t often lead with his jab, and is too content to walk in firing off power punches.

Peterson is the taller and longer of the two, but his strength lies not in his ability to box effectively from the outside, but in his ability to work on the inside and make things rough for his opponents. He has a good sense for when to let his hands go, and when to tie up inside and rough his opponent up. Against Garcia, he’ll want to let his hands go while Garcia is still moving into range and hasn’t set his feet.

Peterson style and physicality leave him open to jabs and straights to his body, so he’ll have to keep moving while he looks to catch Garcia before he sets up to let his hands go. He should also look to keep Danny Garcia from getting into his comfort zone, which is when he’s able to walk down his opponents and throw out four or five big punches in search of that left hook finisher.

If Peterson does indeed look to limit Garcia’s counter punching opportunities, there could be stretches of inactivity. Garcia, being the slower-footed fighter, will have to work to cut off Peterson’s pathways to safety so he can sit down on his punches and really do some damage. As we saw against Mauricio Herrera, Danny Garcia is not as powerful and effective when he can’t sit down on his punches and throw powerful counter bombs.

On paper, Lamont Peterson has the tools needed to beat Danny Garcia. He only needs to step outside of his instinctual style and fight a disciplined and patient fight. But Peterson has fought his own way for a long time, and at 31 years of age it’s hard to think he can flip the switch and change his style. His chin is also suspect, as he’s tasted the canvas several times throughout his career. Danny Garcia will have to work for the victory, but in the later rounds we should see Peterson fully content to bring the fight to Garcia, playing right into Garcia’s hands. Garcia should win by TKO in ten rounds on Saturday night.