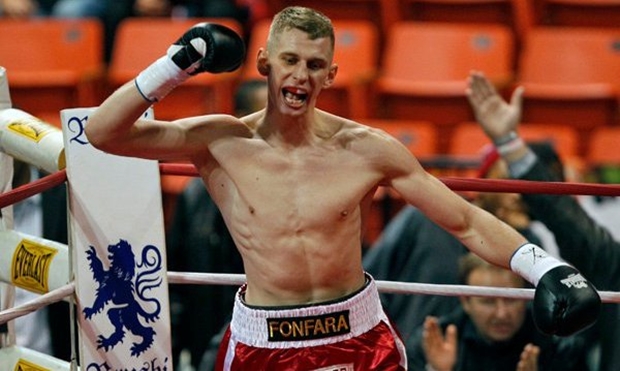 StubHub Center, Carson, California— Andrzej Fonfara (27-3, 16 KOs) may have put an end to the on-again, off-again all-around disappointing career of Julio Cesar Chavez Jr. (48-2-1, 32 KOs) with a comprehensive beating that forced the second generation star to quit on his stool between rounds nine and ten Saturday night.

Chavez, looking slow and sloppy, was making his light heavyweight debut at a pre-arranged 172 lb. limit after a thirteen-month layoff, and did not for a single moment appear to be in control of his first bout under the guidance of powerbroker Al Haymon.

From the opening bell to the closing combination of the ninth and final round, Fonfara was in clear command against a Chavez who threw big punches, but not enough to win rounds or slow down his Polish opponent.

Chavez was tagged hard and consistently throughout the bout and showed no ability whatsoever to avoid the shots coming his way.

At the end of the ninth round, a big left hook wobbled and dropped Chavez for the first time in his career– and the “Son of the Legend” did not respond well.

Despite beating the count, fighting back, and making it to his corner, it was clear that Chavez had enough. He then pretty much waved off his own fight with a half-hearted claim of a leg injury between rounds.

After the bout, Fonfara beat the drum for a rematch with Adonis Stevenson. Chavez, meanwhile, first declared that he had won and then vowed to come back better than ever.